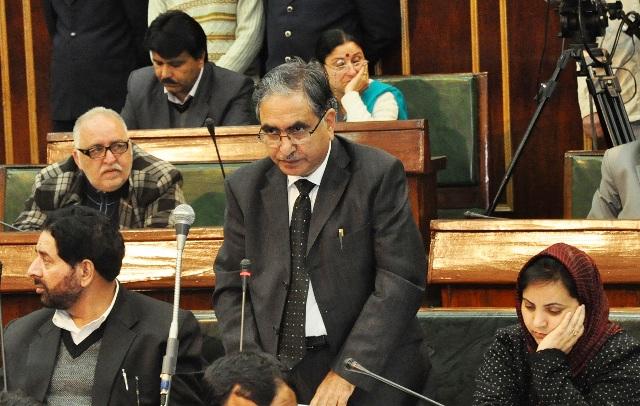 , March 10 (Scoop News) –  Minister for Agriculture,  Ghulam Hassan Mir on behalf of the Minister for PHE, Irrigation &Flood Control today admitted in the Legislative Assembly that heavy loss has occurred to the public property due to floods in district Kupwara.

He said damage report to the tune of Rs. 45 crore has been received from the Chief Engineer I&FC Department, which has been processed for consideration under NCRF. The works put to tenders for most vulnerable spots shall be taken in hand as and when the requisite funds are received for the purpose by the Department.

Replying to a Calling Attention Notice of Mir of Mir Saifullah, the Minister said two projects for Mawar and Pohru basin at a cost of Rs. 42.16 crore and Rs. 21.40 crore respectively have been incorporated in the comprehensive project report of ‘River Jehlum along with its tributaries’  costing to Rs. 2083 crore which stands submitted to the Ministry of water Resources, GOI, for approval under the comprehensive Flood Management programme (FMP).

He said crates for protection of various critical spots amounting to Rs. 30 lakhs stand issued by the department for mitigating the problem to some extent on the persistent demand of MLAs.

In the meanwhile, the Government has decided to dovetail MGNREGA funds for the labour component and the irrigation & FC Department have to supply the crates for flood protection works , the Minister said adding that such a project has already been taken up for the Mawar Nallah in Langate constituency and is proposed to be replicated in respect of other Nallahs. The work in rest of Nallahs of district Kupwra will be taken up accordingly.

Ghulam Hassan Mir on behalf of the Minister for PHE, Irrigation & Flood Control, today informed the House that various works were executed during the year 2009-10 under NABARD loan assistance on Nallah Pohru and Nallah Kehmil which were later damaged due to heavy floods in July 2010.

He said the loan sanctioned under NABARD for the project stands almost exhausted. However, balance works for protection of these Nallahs near Mughalpora Shartway, Bangregund and Pedergund have been included in the comprehensive project report of river Jhelum along with its tributaries at an estimated cost of Rs. 2083.93 crores which stands submitted to the Government of India, Ministry of Water Resources under FMP, the Minister added.

He said an amount of Rs. 10.3 crore for Pohru Nallah and Rs. 12.5 crore for Kehmil Nallah stand incurred as on date against the approved costs of Rs. 13.6 crore and Rs. 16.3 crore respectively on these projects under NABARD loan assistance.

Minister was replying to a Call Attention Motion by Ch. Mohammad Ramzan.