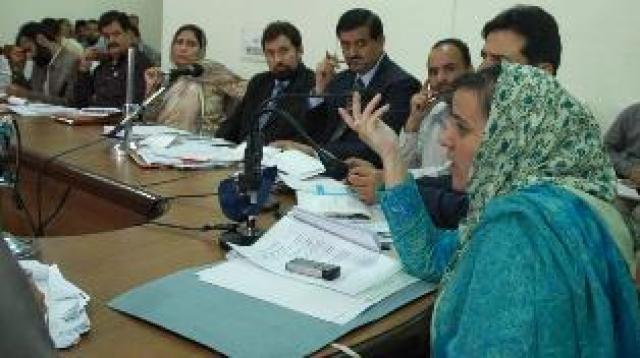 Srinagar, September 4 (Vijay Kumar) – J&K Woman Minister for Social Welfare, Ms. Sakina Itoo said that Social Welfare department is envisaging to launch an ambitious Centrally sponsored scheme “Anganwadi on Demand” in future under which every habitation having a population of 40 children upto 6 years of age shall be covered by virtue of which the goal of universalization  of ICD services would be achieved.

The Minister said that under Rs. 95.8 crore would be incurred on supplementary nutrition to cover 8.81 lakh children under ICDS during current fiscal in the state.She said state government is going to establish 3094 more Anganwari centers across Jammu and Kashmir and the centre has accorded sanction for the same.

,Ms. Sakina Itoo, while taking a review of the functioning of Social Welfare and allied departments at a high level meeting here today.The Minister said that 15 new centrally sponsored welfare schemes are also being introduced in the state for socio-economic upliftment of deserving and weaker sections during the coming days.

She said during current fiscal, 3.53 lakh destitute and other deserving persons of the state will be provided financial assistance of Rs. 55.70 crore while Rs. 54.72 crore will be distributed among 1.39 old age persons as monthly pension. Rs. 14 crore would be given to 2.1 lakh Gujjar and Bakerwal students and Rs. 10 crore to 1.51 lakh Pahari students as scholarship during the current fiscal.

She directed the concerned to ensure timely completion of computerization of the records of beneficiaries for easing disbursement of pension to the deserved persons under ISSS and NOAPS.   She asked for organizing more and more awareness camps in coordination with other departments so that people get information about various welfare schemes.

The Minister said that Rs. 20.15 crore have been proposed for welfare of SC/ST/OBC beneficiaries of the state during the current fiscal. She stressed upon the concerned authorities to work with dedication and missionary spirit and ensure that every deserving person avail the benefits of welfare schemes. She cautioned that anyone found indulging in malpractices in disbursement of financial assistance, scholarship   providing of nutrition would invite severe punishment.