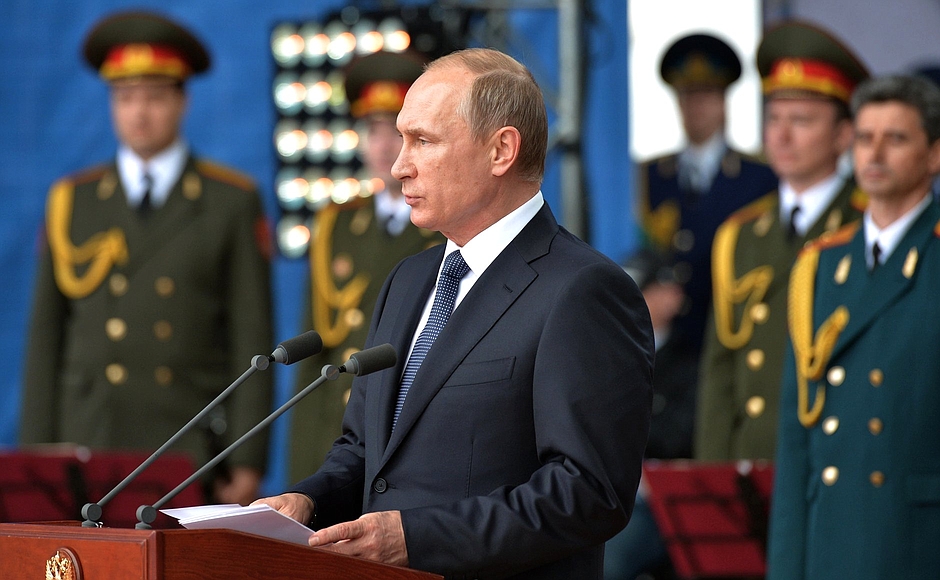 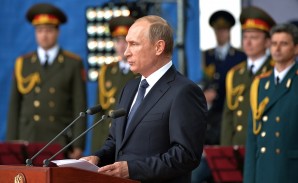 “This year we will supply more than 40 new intercontinental ballistic missiles to our nuclear force. They will be capable of overcoming any most technically advanced anti-missile defense systems”, said Putin.

President Vladimir Putin gave a speech at the opening ceremony of the  ARMY-2015 International Military-Technical Forum. There he announced that Russia has developed and deployed an addition 40 nuclear weapons to its nuclear arsenal.

I am pleased to welcome you at the opening of the ARMY-2015 International Military-Technical Forum. It is taking place at a new park that we call Patriot. This place will become a major cultural, exposition and business centre of the Russian Defense Ministry. After its full commissioning, this complex and its infrastructure will open up broad opportunities for the visitors.

Here you will be able to see re-enactments of famous, legendary battles, get to know the history of military aviation, the navy and army and take part in competitions in military-technical and extreme sports. I am certain that the new park will become a major component in the system of military-patriotic education of the younger generation.

This is also a wonderful location for demonstrating the latest developments in military equipment and weapons that this country has always been famous for. This is why we decided to hold the first such large-scale exhibition of Russia’s achievements and demonstrate scientific and technical potential of the country’s defence industry here at the Patriot park.

Unlike specialised exhibitions, this one will feature the broadest range of military products, including small arms and armoured vehicles, combat robots and control systems that will determine the current and future status of our Armed Forces. Equipping them with modern and advanced technology weapons remains a key task of our military capability development. We have always paid special attention to the implementation of the State Armament Programme and modernisation of the military industrial complex and will continue to do so in the future.

Thus, this year we will supply more than 40 new intercontinental ballistic missiles to our nuclear force. They will be capable of overcoming any most technically advanced anti-missile defense systems.

In April, we launched full-scale work on the radar station in Armavir. In the next few months, we are to test a new radar unit for over-the-horizon airborne target detection. It will eventually control the western strategic area. We will start building a similar unit this year for the eastern area.

The troops are being equipped with new armored vehicles based on the universal Armata, Kurganets and Boomerang platforms and Koalitsiya-SV self-propelled units.

Combat capabilities of these machines are unrivalled. They were first shown at the military parade on May 9 when we marked the 70th anniversary of Victory in the Great Patriotic War.

We are actively upgrading the combat potential of our Air Forces and Navy. This year a new strategic submarine cruiser Vladimir Monomakh will go on combat duty. We will increase our surface fleet and the aviation component.

We expect our defense industry to show greater efficiency and productivity both in terms of strengthening Russia’s security and its economy, and in terms of developing Russia’s scientific and technology base.

I would like to remind you that as a result of implementing the State Armament Program, the share of modern weapons should increase up to 70 percent and in some cases up to 100 percent by 2020. This is an ambitious target. We expect defence industry facilities and research and design centres to make every effort to implement these plans on time and with good quality.

Obviously, an efficient defense industry is an important resource for the growth of the entire economy. Moreover, it is the defense industry that should set the bar in many technological and production aspects and remain the driving force for the development of innovations, including dual-purpose and civilian ones in such branches of the economy as energy, engineering, communications, microelectronics and some other.

It is important to improve the mechanisms of private-public partnership in this area, spread the positive experience of private companies that offer parts and components for military production and, of course, to more actively involve civilian companies, universities and research centers in the implementation of the state defense order.

I would like to highlight that our arms and military equipment remain in high demand on the global arms market. Throughout the past years, there has been a stable demand, while the orders portfolio has been drawn up for years ahead.

Attending this Forum are delegations from 59 countries. At this opening ceremony there are visitors from even more countries. We expect that in the course of the scheduled presentations you will be able to get additional proof of the high efficiency and reliability or Russian military products and discover new opportunities for long-term contacts.

Today, Russian companies can offer the entire range of services – from supplying arms and equipment to providing post-warranty maintenance, servicing, and personnel training. And of course, they are interested in expanding the areas of cooperation with foreign partners.

I would like to stress that we are open to cooperation, joint work, joint development of promising arms, and launch of new innovative projects.

I would like to wish the participants and guests of the ARMY-2015 Forum fruitful work, interesting contacts and meetings, and good results from your joint work.

Thank you for your attention.”