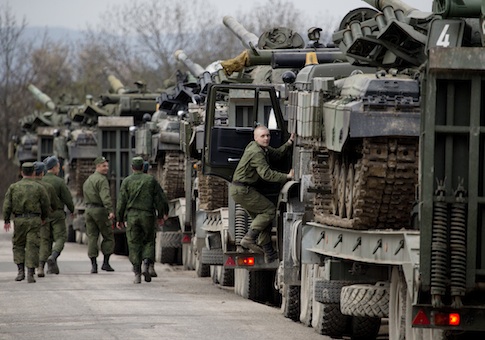 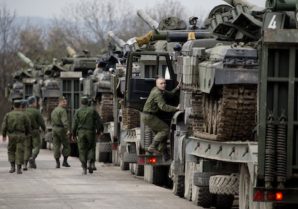 Ukrainian soldiers transport their tanks from their base in Perevalnoe, outside Simferopol, Crimea, Wednesday, March 26, 2014. Ukraine has started withdrawing its troops and weapons from Crimea, now controlled by Russia. (AP Photo/Pavel Golovkin)

Alarming messages are coming from Russia-Ukrainian common border. Throughout the whole perimeter of the Eastern frontier of Ukraine, in occupied Crimea and Donbas Russian Federation has deployed the force grouping numbering more than 100000 servicemen. There are about 40000 people in Donbas stretched along the Northern boundary and about 50-60 thousand people in the East. This formation is in permanent movement, rises in number of personnel and is getting prepared for offensive operation. Airborne troops have been also deployed in the frontier area and into the territory of occupied Crimea. Materiel transfer is in progress, there are 700 (!) tanks merely in Donbas. In the end of August and beginning of September Russia carried out a random checkup of the Southern, Western and Northern military districts of the Northern fleet Aerospace and Airborne Command Authorities.

Such military strategic-scale events Russia was fulfilling before incursion to Georgia in 2008 and before occupying Crimea in 2014. Today Putin is outspokenly rattling saber increasing pressure on the West to make it reconsider basic principles of the European and world patterns on his conditions. It has become obvious for each and everybody that having annexed Crimea and unleashed war in Donbas against independent Ukraine, Russia violated the fundamental pillars of peace – territorial integrity, free choice of unions and respect of international law. By its actions Russia has set at stake the very process of non-proliferation of nuclear weapons, by having turned Budapest memorandum in a useless piece of paper and one more time confirmed to Bismarck’s quotation that any treaty signed with Russia is not worth of the paper it is written on. The other signers – the USA and Great Britain – regrettably haven’t met assumed commitments and restricted themselves to high-flown statements and introduction of sanctions.

At the same time we can’t affirm that international community have not responded at Russia’s actions at all. A series of tough decisions has been taken with a view to contain the Kremlin. There is one more important aspect though bringing uncertainty into the deeds of some European leaders. For instance the leaders of France, Germany and the USA are still unready to acknowledge the presence of Russian troops in Donbas. And it is happening not due to the lack of intelligence data as regarding the contemporary means of reconnaissance and observation it would be impossible to conceal the presence of Russian Armed forces in Donbas and Crimea. Western leaders are perfectly informed on the real tactical situation on the Russian-Ukrainian border. Even though they go on playing in political correctness as public recognition that there are Russian troops in Ukraine requires to take utterly more significant political decision and neither France, nor Germany or the US are ready for this step. There may be some reasonable explanations for this but they are completely pragmatic. For example conjuncture considerations on the eve of elections relied with the struggle for voters’ support which is seriously influenced by the populists and nationalists of all hues as well as powerful Russian propaganda. Hasn’t such state of affairs given rise to the talks about craving for easing sanctions against Russia under the pretext of their affecting the business? But if we take more thorough approach to the matter and find out whether sanctions are actually that pernicious for the western companies it will turn out that such statements are nothing but a myth invented by the Kremlin’s propaganda and materials containing information about “losses from sanctions” are often presented in exaggerated manner.

The main reason of insufficient efforts exercised by the West towards Russia is in my opinion due to fact that community (politicians, experts, journalists, businessmen and ordinary residents) perceive current situation as sort of anomaly or a transient state on the way towards better future. Many people haven’t realized that a giant flux appeared on the surface of the Earth in the form of Putin’s Russia wouldn’t dissolve itself and that the world has changed dramatically. Nowadays there is an actual war of civilizations, the war of values. Putin and his Russia are striving to reshape the world aspiring to fling it into the XX century-like state, when the world was divided within zones of influence. But can anybody name at least one country that became happy upon arrival of the “Russian world”…?

The countries making the backbone of the world order – the US, Germany and France – are preparing to conduct presidential and parliamentary elections. A lot will depend on their results. Russia put great hopes on the victory of its “allied” candidates. In the US it is a pretentious politician Donald Trump whose ridiculous statements concerning external policy cause anxiety. In France it is ultra-loyal to Russia populist and eurosceptic – the Head of the right-wing party the National Front – Marine Le Pen whose victory may signalize the disaster for the whole European Union and France as well. In Germany the Kremlin would be glad to see Angela Merkel quit her post. In case of victory of social-democratic party in September 2017 it is either Chancellor Deputy Sigmar Gabriel or the Minister of Foreign Affairs F-V. Schteinmaier, who may become her successor. Both of these politicians stand up for lifting sanctions and restoring relations with Putin.

The challenges defying the Western democracies and Europe in particular compel to elect not loudly shouting populists and odious nationalists but politicians who know thinking creatively and act prudently with the account for long-term perspective. Otherwise we will be sorely disappointed.