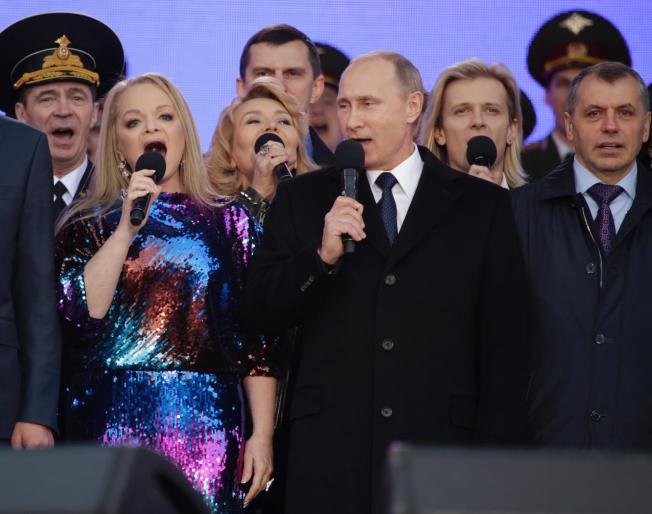 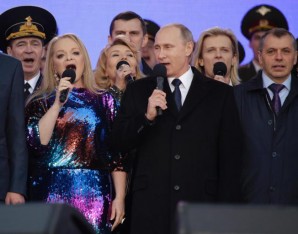 Putin sings at the We’re Together concert.

On March 18, 2015 President Vladimir Putin attended the We’re Together! concert and meeting celebrating the first anniversary of Crimea and Sevastopol’s reunification with Russia.

The concert took place on Moscow’s Vasilyevsky Spusk, just near the Kremlin. Popular Russian music groups and singers performed at the event.

Exactly one year ago, Russia, which we are speaking of so much right now, and the Russian people showed amazing togetherness and patriotism in supporting the aspirations of the people of Crimea and Sevastopol to return to their native shores.

We understood and felt with our hearts and minds at that moment just how much the links between time and generations matter to us, and how much our heroic forebears have done for our country. We understood that Crimea was much more to us than just a piece of land, even a strategically important piece of land.

What was at stake here were the millions of Russian people, millions of compatriots who needed our help and support. We understood how important this is to us and that this was not simply about land, of which we have no shortage as it is.

The issue at stake here was the sources of our history, our spirituality and our statehood, the things that make us a single people and single united nation.

Friends, we in Russia always saw the Russians and Ukrainians as a single people. I still think this way now. Radical nationalism is always harmful and dangerous of course. I am sure that the Ukrainian people will yet come to an objective and worthy appraisal of those who brought their country to the state in which it is in today.

For our part, we will do everything we can to help Ukraine get through this difficult period in its development as soon as possible and establish normal interstate ties.

We ourselves will continue moving forward. We will strengthen our statehood and our country. We will overcome the difficulties that we have so easily created for ourselves over these recent times.

And we will also overcome of course the problems and obstacles that others try to create for us from outside. Such attempts are doomed to fail in general when it comes to Russia.

Thank you for your support. Long live Russia!”