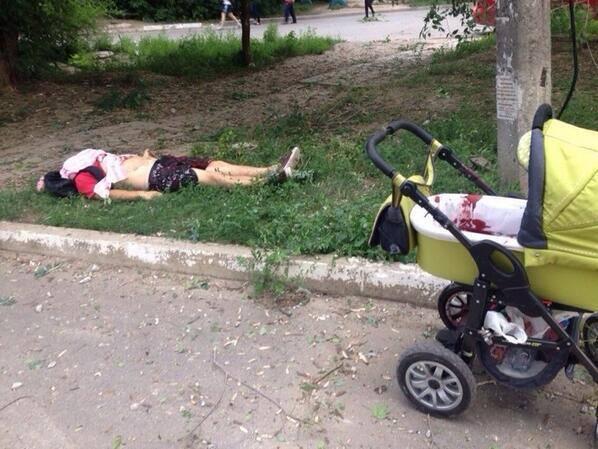 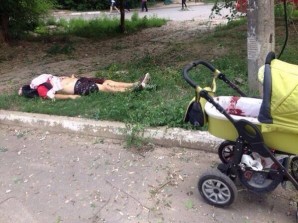 Woman killed during bombing of Lugansk, by the Ukrainian military . This as she was trying to flee the fighting. Note: Baby survived but was injured.  See blood on stroller #Ukraine (click to enlarge)
12:17 PM – 14 Jul 2014. Credit: Twitter feed photo: Nicolaj Gericke

Russia is up in arms over the idea of the US military transferring offensive military equipment and hardware from the conflict in Afghanistan to Ukraine, which would include armored vehicles, weapons and ammunition.

“This would only cause more civilian casualties”, said one Russian lawmaker, who is understandably upset by all this.

“Have they not seen the reports of civilians being killed by the Ukrainian military?”, said the head of the Upper House Committee for Foreign Relations, Konstantin Kosachev.

“Russia cannot be content with such plans as they would increase the tensions near our borders and also inevitably cause more casualties in Donbass,” he said. Adding  that “such a step by the United States would be an open interference into the conflict, which would definitely lead to further aggravation both in Russian-American relations and within the security situation in Eastern Europe as a whole.”

Russia has accused Ukrainian military of slaughtering civilians. Many of these incidents have been fully documented.

As a whole the United States and most of Western Europe have all but ignored reports of civilians being slaughtered and killed. Pointing to a obvious double standard in regard to the war crimes being committed here.

On Monday a Russian Lower House MP was highly  critical of President Obama’s decision to transfer military related hardware from Afghanistan to Ukraine, promising what he called “reciprocal actions from Russia.”

A member of the State Duma Committee for Defense and the chairman of the Russian Union of Afghanistan War Veterans, Frants Klintsevich (United Russia party) told reporters that he would use all his powers to initiate an official State Duma address to President Putin, seeking to start the supplies of Russian military hardware to the Lugansk and Donetsk republics.

Many experts believe that President’s Obama decision to take sides in a conflict like this is totally ill advised. He should seek instead a peaceful resolution to the problem.

See related article: US Senate passes HR 5859 – a bill which would provide arms to Ukraine and impose more economic sanctions against Russia https://groundreport.com/us-senate-passes-hr-5859-a-bill-which-would-provide-arms-to-ukraine-and-impose-more-economic-sanctions-against-russia/