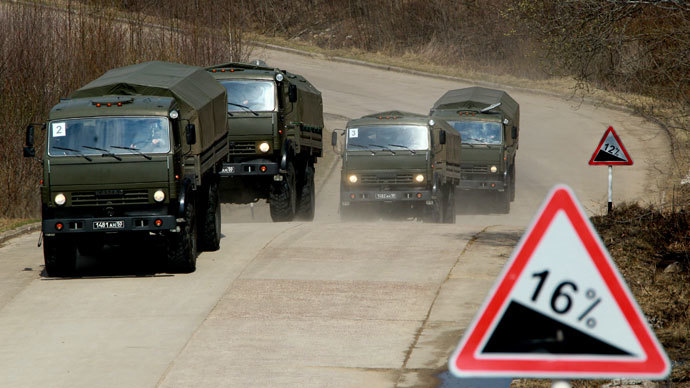 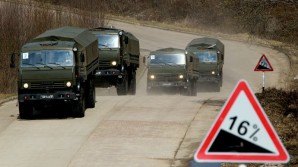 Russian transport vehicles speed to sites housing Syrian chemical weapons for the long journey back through militarily “contested areas”  to seaports to Danish ships who will eventually hand over the weapons to US ships at sea for destruction under UN mandate.

Russia has delivered 75 up armored trucks to Syria, along with other equipment that will be used to transport Syrian chemical weapons arsenal to sites for systematic destruction, Defense Minister Sergey Shoigu reported.

“Over the three days from December 18-20 we have airlifted to the Latakia airport 75 vehicles, including 50 Kamaz trucks and 25 Ural armored trucks,” the minister reported to President Vladimir Putin on Monday.

The vehicles “will allow for the transportation of the Syrian chemical weapons stockpile to the port in Latakia for further transportation outside of the country and destruction,” the Defense Minister said.

The cargoes also included water reservoirs, field kitchens, tents and other things the troops in Syria will need during the operation, Shoigu added in the televised conference call.

“It took 38 flights to Syria to deliver the materiel. Pilots did their jobs well. So did the troops on the ground, which provided security for the operation,” he said.

Russia has assumed the lead role in the destruction of Syrian Chemical weapons, while the United States has been relegated to a subservient role.

In the meantime there remains serious security concerns in such efforts, as U.S. sponsored and supported terrorist groups continue their attempts to undermine the UN in this critical mission.

So far only Russia has stepped up to volunteer to transport the deadly chemical weapons, spending millions of rubles in the process, not to mention risking life and limb to do so. A truly heroic act.

A job the US has refused to do by the way, because of the risk involved?

The ambitious and dangerous mission calls for Russian military personnel to speed the deadly cargo to a Danish vessel to transfer its chemical cargo to an American military ship at sea. However, using overland routes to transport the chemical weapons is a risky option given that Syria is literally crawling with terrorist groups, including al-Nusra and al-Qaeda factions, who have vowed to thwart any attempt to remove the weapons in questions.

Undaunted Russia is desperately trying to avoid a wider war in the region, which could plunge the entire region and the world into armed conflict.

In addition the Russian military has agreed to provide security at the Syrian port of Latakia and in Syrian waters while the country’s chemical weapons arsenal is destroyed, Itar-Tass news agency quoted a Russian official as saying on Wednesday (source: Russia offers security as Syria destroys chemical arms http://www.marineinsight.com/shipping-news/russia-offers-security-syria-destroys-chemical-arms-itar-tass/).