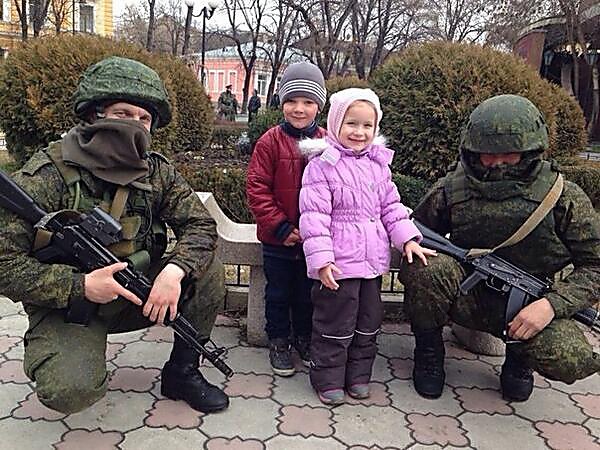 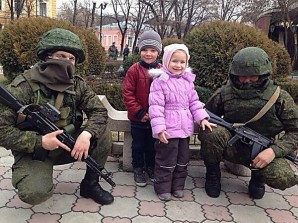 Putin said: “A number of Western countries imposed sanctions and restrictions on Crimea and on Russia as a whole. Our neighbours, it must be said, have not shown much inventiveness. They cut off the water supply or create other problems.” Pictured here: Russian troops pose with children in Crimea. Contrary to western media reports the Russian troops are seen as defenders of the people. Average citizens here don’t fear the soldiers…who they know are there to protect them during the reunification. For the most part the soldiers have been accepted into the community…

The meeting took place on the first anniversary of Crimea’s reunification with Russia an event celebrated by millions of Russians.

What follows is a  transcript with relevant  comments by President Putin addressing the reunification efforts during that meeting at the Kremlin.

A year ago, we already understood the extent of the huge task before us. Together as a country, we must work now to develop Crimea and resolve problems that were neglected for decades. We now have to address the many tasks involved in raising people’s living standards, developing the economy and social sector, and solidly integrating Crimea and Sevastopol into Russia’s legal, financial and administrative system.

It was clear that we would encounter objective difficulties during the transition period as well as attempts to resist the process from outside. This is just what happened.  A number of Western countries imposed sanctions and restrictions on Crimea and on Russia as a whole. Our neighbours, it must be said, have not shown much inventiveness. They cut off the water supply or create other problems. None of this is fatal, but it does of course hamper our ongoing work somewhat.

We had to start by resolving the most urgent priorities. Around two million people in Crimea and Sevastopol have already acquired Russian passports. We raised pensions and social benefits and increased public sector wages.

We also decided that families in Crimea and Sevastopol, who had a second or subsequent child starting from 2007, were entitled to receive the maternity capital payment, regardless of whichever benefits they received earlier.

I note the hard work accomplished in all different areas by the specialists at the federal agencies, the Ministry for Crimean Affairs, and the local authorities. They really have accomplished a lot. The people of Crimea and Sevastopol have shown understanding towards the inevitable transition period difficulties in integrating the two new regions. I want to thank them of course for their understanding.

At the same time, people hope that the concrete problems they face in their everyday lives will be resolved in organised fashion and without delay, and that there will be steady improvement for the better in Crimea’s development.

I want to make it clear to the authorities at all levels, federal, regional, and local, that you must be in constant contact with people and public organisations and respond to the issues that people bring to your notice.

In general, you need to monitor the situation constantly, above all the socioeconomic situation in the region. You must keep greater watch on the quality of provision of state and municipal services and organise immediate responses to any breakdowns, even individual incidents, and cases of officials taking a bureaucratic approach to people.

Sociological surveys show that population groups that have already felt the effects of Russia’s social policy programmes have noticed the biggest increase in living standards and quality of life. This includes the families with children I mentioned before, pensioners, people with disabilities, military service personnel, and public sector workers.

Now it is essential to organise the same kind of effective efforts to support business, farmers, and specialists in key sectors of Crimea’s industry and agriculture.

The socioeconomic issues most on people’s minds right now are rising prices, high unemployment, low wages, poor roads, development of towns and villages, the housing problem, and affordable, quality service in the housing and utilities sector, education and healthcare.

All of this is nothing new. These are problems that people face in other Russian regions too, but some regions have their own specific circumstances. One of the most serious social problems is of course that of drug addiction.

The most important challenge is developing infrastructure, including energy, housing and utilities, and transport. And I would like to ask you to report about progress in the work on a key infrastructure project: the Kerch bridge crossing.

And, of course, the region’s culture, education, and science potential needs to be further developed. It is imperative to bring medical services and mass sports infrastructure to a new, higher level.

Our demographic programmes, measures to promote healthy lifestyles, families, and protection of motherhood and childhood, should work in Crimea as effectively and efficiently as possible. I repeat, right now, it is important to shift focus to challenges of comprehensive, sustainable improvement throughout the entire region.

Last August, the Federal Targeted Programme for Developing Crimea and Sevastopol was adopted; it is designed for the 2015-2020 period. We are planning to allocate about 700 billion rubles toward its implementation.

Let me point out that all activities and programmes should be linked, ranged based on priorities and deadlines. It is imperative to establish strict monitoring over the efficient use of allocated resources, and there needs to be precise interaction between federal agencies and local authorities.

The free economic zone, which contemplates significant benefits for entrepreneurs, should become another important instrument for developing Crimea and Sevastopol. As you recall, a corresponding law came into force on January 1, 2015.

Today, I also expect to hear how the practical work to implement the provisions of this law is going. Have all the necessary legal provisions been adopted? How carefully are business and investor interests taken into account? What problems remain unresolved?

I also ask that you report on preparations for the upcoming holiday season, which has enormous influence on Crimean residents’ employment and income.

Today’s meeting participants include the heads of federal ministries, as well as legislative and executive branches of Crimea and Sevastopol’s government, and members of the public. In this composition, I suggest that we discuss the issues I listed, our objectives and priorities.