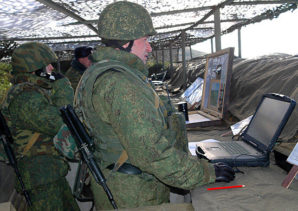 Russian combat troops training for future wars – relentless in their dedication and duty.

According to the Russian Ministry of Defense, Russia is organized to fight a two war strategy.

“Notably, the Russian Armed Forces should maintain the capability to:

– effectively wage two concurrent armed conflicts of any type in peacetime or in an emergency through the use of ready forces, while sustaining the strategic deterrence capability, maintaining readiness of the forces (other troops) and refraining from engaging call-up reinforcements. In addition, the Russian Armed Forces should command the capability to conduct peacekeeping missions, while operating either as part of a multinational contingent or unassisted;
– undertake strategic deployments to put in check escalation of tensions by way of assuring availability of the strategic deterrence weapons and maneuvering the committed ready forces in the event of rising military-political and strategic threats.
– beat back aerospace aggression in wartime through the use of available forces, and concurrently prosecute two local wars following completion of the full-fledged strategic deployment of the Russian Armed Forces”

This doctrine is affirmed on their website in a detailed article called “Mission and Objectives of the Russian Armed Forces http://eng.mil.ru/en/mission/tasks.htm .

The use of force is only in order to assure the “security of the Russian Federation”, according to the website.

The Russian Armed Forces are trained to directly engage in global, regional and local war.
“The Russian Armed Forces should be ready to mount active (offensive and defensive) operations under any scenario of armed conflicts being unleashed and carried on in the conditions of the adversary resorting to massive use of modern and advanced lethal weapons, with assorted WMDs (weapons of mass destruction) making no exception”, the article noted.