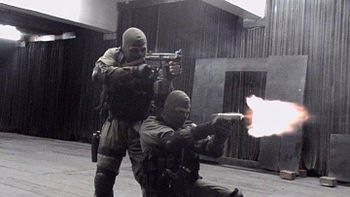 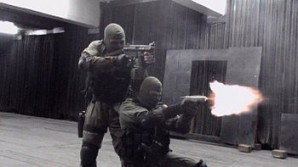 “We fully share Egypt’s active stance in combating international terrorism, especially in conditions of an unprecedented growth of a terrorist threat in the Middle East”, said Putin. Pictured here: Unit 777 commandos during training exercise. Unit 777 is currently located somewhere in southern Cairo and is equipped with Mi-8 helicopters hunting Brotherhood and Hamas terrorists. The unit actively trains with a number of Western special operations groups, including the United States Army’s Delta Force, United States Navy’s SEALs, and the French GIGN.

Here is some of what Russian President Putin had to say at a press conference after the meeting between the two leaders that touch on military related matters:

“We (Russia and Egypt) are also actively developing military technical cooperation.  In March, we signed a corresponding protocol. We are supplying arms to Egypt and have agreed to expand this cooperation.

We also have good prospects in the automobile industry – both in terms of passenger cars and cargo vehicles.

We gave special attention to contacts between our citizens in such an important area as tourism. Egypt is one of the favorite holiday resorts among Russian tourists. Last year, despite certain limitations, almost two million tourists from Russia visited the resorts of the Red Sea coast. This year the number will be much greater.

We only touched upon certain international issues, such as the Gaza Strip, settlement of the Palestinian-Israeli conflict and the situation in Syria and Iraq, but we will deal with these later on in our talks.

We fully share Egypt’s active stance in combating international terrorism, especially in conditions of an unprecedented growth of a terrorist threat in the Middle East.

Finally, I would like to thank President of Egypt, Mr al-Sisi for very constructive and friendly negotiations. We confirmed our mutual desire to enhance the multifaceted Russian-Egyptian cooperation.

NOTE: The US has recently released $575m (£338m) in military aid to Egypt that had been frozen since the ousting of President Mohammed Morsi last year. Some of all of that money will probably be used to purchase Russian weapons.

The Pentagon and State Department refused comment in this situation!