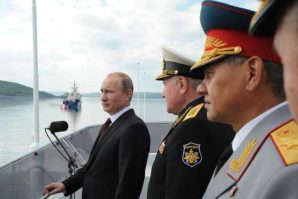 Kremlin’s aggressive actions towards Ukraine are beyond the pale and are no longer shocking the world community. Russian aggression is perceived now as something ordinary, the emotions have calmed down and there are even talks about lifting sanctions and weakening of political and economic pressure towards Russia. But all this refer to protected peaceful Europe and mighty USA, which easily sleep and at the same time Ukraine continues to suffer from aggressive ambitions of the Russian political elite.

It is known that during annexation of Crimea in 2014 Russia illegally seized two jack-up rigs (“Petro Godovanets” and “Ukraine”) from the area of the Odessa gas field. In this November they were illegally relocated and on December, 15 an oil rig “Tavrida” was set to replace them. The “Tavrida” had been previously located close to the Crimea.

Thus, Russia has rudely violated the international maritime law once again. Occupying the maritime economic zone of Ukraine and building up its military presence Moscow obviously calls Kyiv to coercive scenario and threatens Ukraine with a maritime blockade, reasoning such actions with the necessity of drilling rigs and oil platforms security.

At the same time other countries, including the EU and NATO members, are jeopardized by direct war provocations in this zone and they can be involved by Russia into a military conflict in the Black Sea region.

In the circumstances, the western world should immediately impose new and strengthen existing economic and political sanctions against Russia, so as to prevent coercive development of situation and to bring Russia to international legal responsibility.

Filed under: News, Politics
Share Tweet Pin G Plus Email
previous article: BPH cause: what underpins the effectiveness of Thermobalancing therapy for men with enlarged prostate
next article: Russian pirates in Ukrainian waters