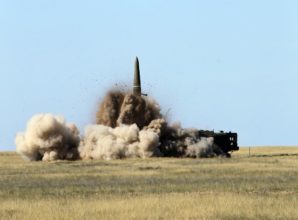 On May 8, 2014 President of Russian Federation – Vladimir Putin observed a training session to test the administration of the Russian Armed Forces, which focussed on the deployment of individual units and divisions of missile forces, artillery, aviation, air defense and aerospace defense forces.

Today, on the eve of Victory Day and timed to coincide with the CSTO summit we are holding manoeuvres to test the readiness of the Armed Forces of the Russian Federation.

Instructions to prepare the event were issued in November 2013.  Today the planned exercises will involve all types and branches of the Armed Forces of the Russian Federation across the country, including the nuclear deterrence forces.

DEFENSE MINISTER SERGEI SHOIGU: Comrade Commander in Chief, pursuant to the Armed Forces training plan, today we are holding exercises to test the administration of the troops and forces involving action practice.

The exercises involve forces and facilities of all military districts, strategic missile forces, aerospace defence forces and long-range aviation. This event is an important stage in the training of the Armed Forces in 2014 and is held pursuant to your orders issued six months ago.

Present-day challenges and threats to the nation’s security make it imperative to maintain the army and navy in a state of readiness for quick and efficient counteraction under any circumstances.

National security is unquestionably guaranteed by the strategic nuclear forces. Our nuclear triad is in constant combat readiness; it is regularly equipped with up-to-date missile units with enhanced combat capacity.

Primary attention is given to improving the nation’s aerospace defence system, to enhancing the potential of high-precision weapons of destruction and creating a single information space. These priorities have been set by the state armament programme to 2021, and by Armed Forces development, modernisation and re-equipment plans. Their implementation will make it possible to guarantee the defence of the Russian Federation and its allies.

In the course of today’s exercise, we will demonstrate the combat capacity of the strategic, offensive and defensive forces.

VLADIMIR PUTIN: I would like to thank you for your work to prepare this event. We will continue holding both scheduled and unscheduled exercises and manoeuvres. Analysis shows that this is a very effective way of maintaining combat readiness of the army, navy and air force.

I would like you to make a careful analysis of today’s exercises. It was all done in real time. Obviously, the exercises were not staged – this was real military action. You should analyse everything carefully, both the strong and weak points, draw the necessary conclusions and report to the Defence Minister. After that, I expect the Defence Minister to make a detailed report on today’s exercises.

VLADIMIR PUTIN: I would like to thank you all once again and to congratulate you on the coming Victory Day. Thank you.”

Note: is a command center built in Moscow by the Russian Defense Ministry which will integrate all existing in the country departmental management and monitoring systems. The center will perform tasks and control all means acting in the interest of national defense in wartime and in peacetime.

The order and regulation for its construction was specified in a Presidential decree sigend by President Vladimir Putin.

Source: National Defense Centre to be created in Russia in 2014 http://en.itar-tass.com/russia/714553