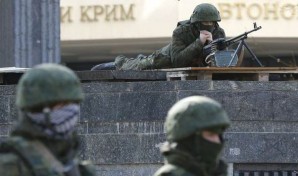 Russian troops stand at the ready to defend key military sites in Crimea.

Russia’s representative to the UN, Vitaly Churkin, reminded representatives on Tuesday that the deal surrounding the Black Sea Fleet allows Russia to station a contingent of up to 25,000 troops in Ukraine. “We are within our rights”, he said.

A fact the US media have chosen to all but ignore for whatever reason.

According to a source within the Russian Ministry of Defense, who wished not to be identified in this report: “There is nothing criminal about our actions.We have legitimate military and national security interests here, despite what President Obama says.”

The 1997 deal between the Ukrainian government and the Russian Federation allows the Russian navy to have up to 25,000 troops, 24 artillery systems with a caliber smaller than 100 mm, 132 armored vehicles, and 22 military planes on Ukrainian territory. Currently Russia has around 19996 troops in Crimea.

In compliance with those accords, there are currently five Russian naval units stationed in the port city of Sevastopol in the Crimean peninsula:

The 68th Harbor Defense Ship Brigade formed by the 400th Antisubmarine Ship Battalion of four vessels and 418 Mine Hunting Ship Division, which consist of four ships as well;

The 422nd Separate Hydrographic Ship Division, which includes Cheleken, Stvor, Donuzlav and GS-402 survey vessels as well as a group of hydrographic boats.

Besides the naval units, Moscow also has two airbases in Crimea, which are situated in the towns of Kacha and Gvardeysky.

The Russian coastal forces in Ukraine consist of the 1096th Separate Anti-Aircraft Missile Regiment in Sevastopol and the 810th Marine Brigade, which hosts around 2,000 marines.

Meanwhile the Pentagon said late Monday in an email that it has ordered the “suspension of all military relations with Russia effective immediately, including a joint naval exercise planned for May.” All trade and investment talks between the countries were also halted.

The White House refused comment on Russia’s right to protect citizens abroad and protect its vital military and national security interests in Crimea.