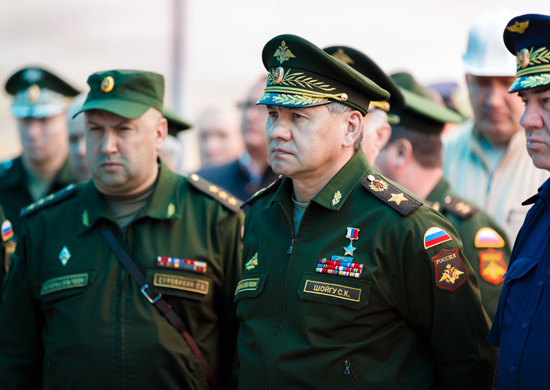 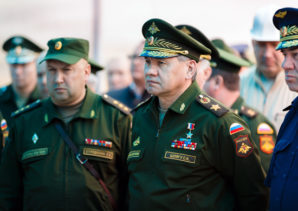 Russian top Defense Minister Sergei Shoigu ordered the establish modern military and social infrastructure at the Step airfield. Gen. Shoigu is pictured in the center surrounded by his top aides.

According to a report on the Russian Ministry of Defense website, General of the Army, Defense Minister Sergei Shoigu ordered “the establishment of not only military but also social infrastructure of the Step airfield” and military town located in Zabaikalsky Krai, where the separate Su-25 attack aviation regiment will be deployed.

The Sukhoi Su-25 (NATO reporting name: “Frogfoot“) is a single-seat, twin-engine jet aircraft developed in the Soviet Union by the Sukhoi Design Bureau. It was designed to provide close air support for the Soviet Ground Forces.

This was confirmed by local sources in the region, who describe “a lot of construction activities at the airbase currently.”

On April 8, 2015  the Defense Minister completed his final inspection of  the *Eastern MD troops.

His working trip started at the Step airfield construction where he was personally briefed on the progress. There he met with military leaders and strategists on ways to move this project forward as a matter of urgent national security concern.

The airfield ( Степь-Оловянная) is strategically located in 250 km South-West to Chita. About 14 km NW Yasnogorsk

“All work must be finished in 2016,” ordered General of the Army Sergei Shoigu after listening to report of representatives of the 3rd Air Force and Air Defense Command of the Eastern MD and Specstroi leadership.

The Head of the military department followed up by ordering to us what he called “maximum effectiveness” with respect to the former hangars and aircraft shelters where the aircraft will be housed. This will involves the freeing up of additional resources and personnel to complete the task.

When the construction is finished, the facility will accommodate about 1000 servicemen and various support personnel. All of whom are to be vetted in terms of security clearances.

During his working trip Minister of Defense will hear reports of the Eastern MD Command concerning the realization of the “Activities plan until 2020” as well as will check the organization of military training at the military units of the District.

A list of military units assigned to the Eastern District include:

Filed under: Military, News
Share Tweet Pin G Plus Email
previous article: Opening Ceremony Of Kadapa Airport
next article: The Truth of Genesis: The Evil and Ignorance of Gentile Christianity – Part 2 of 7