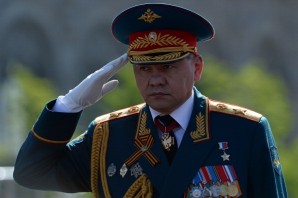 Russian Defense Minister Sergei Shoigu salutes thousands of troops at the Red Square Victory Day parade in Moscow, on May 9, 2014. This  marked the  69 year anniversary of  victory in World War II against Nazi Germany. Friends describe him as sometimes cold, aloof and calculating. Among various intelligence agencies he has been described as “a genius”, “a brilliant military leader, tactician  and strategist” – who has devoted the majority of his adult life in service to his country.

Minister Shoygu “guaranteed” that there were no Russian military personnel involved in the humanitarian convoy, nor was the convoy to be used as a pretext to further intervene in Ukraine. He acknowledged that the goods would be delivered and distributed under the International Committee of the Red Cross. Minister Shoygu assured Secretary Hagel that Russia was meeting Ukraine’s conditions.

The two ministers discussed the need to have bilateral follow-on meetings of the Intermediate-Range Nuclear Forces Treaty.

They also agreed to maintain open lines of communication.”

Sergey Kuzhugetovich Shoygu (Russian: Серге́й Кужуге́тович Шойгу́, Tuvan: Сергей Күжүгет оглу Шойгу; born May 21, 1955) is a Russian political figure who has served in the government of Russia as Minister of Defence since 2012. Previously he was Minister of Emergency Situations from 1991 to 2012 and briefly served as Governor of Moscow Oblast in 2012. He holds the military rank of General of the Army. He is also the President of the International Sport Federation of Firefighters and Rescuers.

On November 6, 2012 he was appointed as Minister of Defens eby special order of the President of Russia Vladimir Putin  in order to deal with very serious allegations of corruption, embezzlement and fraud within the Russian Defense Department .

Shoygi is a man of unquestioning loyalty and ethical standards.

He is highly decorated and considered a hero of Russia:

Awards include the following:

Various intelligence reports suggest Shoygu is a genius, especially in terms of technical analysis and military strategy. One person said Shoygu is “scary intelligent.” Meaning he has a mind that is like a steel trap. He has quietly reformed the Russian military over the past two years into a more cohesive and unified command force. Behind the scenes he has been the major force behind Russia’s modernization of its armed forces.

See article: Modern weaponry will make up 70% of the Russian arsenal by 2016 https://groundreport.com/modern-weaponry-will-make-up-70-of-the-russian-arsenal-by-2016/

This is in keeping with President Putin’s military  optimization program initiative:

Shoygu  is also described in various reports as a  brilliant military tactician, that has strengthened Russia’s nuclear deterrence capabilities across the broad, including such things as ordering increase patrol of Russian ballistic nuclear submarines of the coasts of the United States  and ordered the testing of US (NORAD) air defenses recently by conducting simulated nuclear strike drill by Russian strategic nuclear bombers against the United States (and allied forces in Europe).