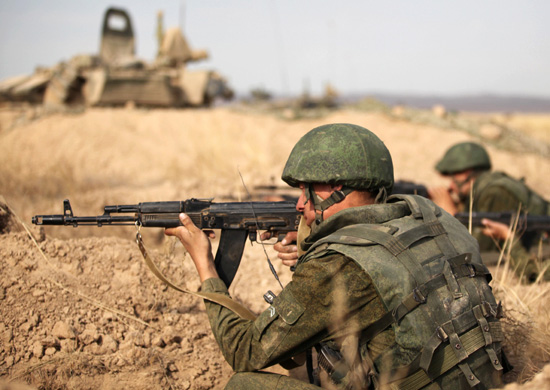 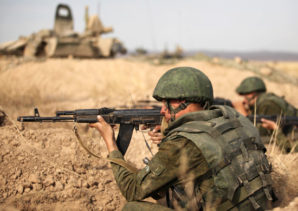 “We must develop all components of our strategic nuclear forces, which play a very important part in maintaining global balance and essentially rule out the possibility of a large-scale attack against Russia”, says Putin. Pictured here: Russian infantry 2014.

On December 19, 2014  President of Russia Vladimir Putin took part in an expanded meeting of the Defense Ministry Board.

In his opening remarks at the meeting, the President outlined the country’s defense priorities for 2015.

We are holding this Board meeting at the new National Defense Control Centre. The Centre is now on permanent combat duty. I congratulate you all on this event.

The Centre’s tasks include analysing and forecasting developments in the geopolitical situation and coordinating the authorities’ work in the defense sector.

The new Centre’s capabilities will raise the quality of our armed forces’ command and the Centre will play a key part in our national defense and security system and will help to resolve the big tasks facing the armed forces.

Russia will always act consistently to protect its interests and sovereignty and will strive to strengthen international stability and support equal security for all countries and peoples.

At the same time, the situation in the world around us is not becoming any simpler. You all know about the USA’s plans to build a missile defence system. NATO has stepped up its activity too, including in Europe, especially in Eastern Europe.

In this respect, I want to say that our military doctrine nevertheless remains unchanged and is exclusively defensive in nature, as you know. But we will defend our country’s security firmly and consistently.

Speaking this year and before this audience, I have to say a few words about the events in Crimea of course. I want to thank once again the heads of our Armed Forces and all of the personnel involved for their precise, restrained, and carefully weighed action and for their courage and professionalism during the events there.

You assuredly protected Crimea’s residents from great tragedy, from bloodshed and humanitarian disaster, and made it possible for them to express their free will as citizens in the referendum that took place.

Colleagues, recent events have shown that our army is changing, acquiring new features, becoming more modern, and is ready to carry out the most difficult and responsible missions. The results of the snap inspections carried out this year clearly showed this to be the case, as did the results demonstrated by the various units during the more than 3,500 training drills and exercises, the biggest of which were the Vostok 2014 exercises.

Let me note too that the state defence procurement programme for this year is practically completed. We spoke in more detail about this at the meeting just before on the common day for formal commissioning of defence industry goods.

Together with the qualitative development of the armed forces, it is also becoming more prestigious to serve in the army. This year, there are six people competing for every one place in some of the Defence Ministry academies. The number of contract servicemen has increased by more than 75,000 people. There is now real competition for the right to serve on contract in the armed forces as privates and sergeants. Most of the people applying are well-trained and motivated. More than two thirds of contract servicemen in 2014 have higher or vocational education.

At the same time, it is patently obvious that the army and navy need further improvement and development. We need to carry out our defence procurement programme and all other defence development programmes in full.

I want to draw your attention to the following priority tasks.

First, we must complete drafting of the 2016-2020 Defense Plan. This plan should be ready for approval in a year’s time, in December 2015.

This year, we have made adjustments to the Federal Law On Defense and drafted amendments to the Military Doctrine. Together with the defence plan approved on November 26, 2014, they will serve as the base for drafting short-, medium- and long-term planning documents.

Second, we must develop all components of our strategic nuclear forces, which play a very important part in maintaining global balance and essentially rule out the possibility of a large-scale attack against Russia. In 2015, the strategic nuclear forces will receive more than 50 intercontinental ballistic missiles. You can imagine what a powerful force this is. We must continue modernising our strategic aviation and put the two missile-carrying submarines Vladimir Monomakh and Alexander Nevsky on combat duty.

In the medium term through to 2021, we need to complete the transition to entirely modern arms for our ground-based nuclear forces, modernise the entire fleet of Tu-160 and Tu-95ms bombers, and also develop a new generation strategic bomber.

Third, we need to complete the establishment of the Aerospace Defense Forces in 2015. Deployment of this new type of force will make it possible to use in better coordinated fashion our aviation, air defence and missile defence systems, thereby considerably raising the level of protection of Russia’s airspace.

Fourth is a quality reinforcement of defense in strategically important parts of the country such as the Arctic and other regions.

The unified strategic command [in the Arctic] was established on December 15, based on the Northern Fleet. Next year will see the completion of military infrastructure on Novaya Zemlya, Kotelny and Wrangel islands, and Cape Schmidt. I ask you to keep these matters under your constant control.

Let me say again that we have no intention of militarizing the Arctic. Our action in the Arctic is restrained and reasonable in scale and is simply in keeping with what Russia unquestionably needs to do to ensure its defence capability.

Fifth, to maintain a high and constant level of combat readiness, we must continue the practice of snap inspections. Next year, they should extend to all military districts and branches of the armed forces, and also to the relevant federal and regional agencies and departments.

Furthermore, next year, we will hold the large-scale Russian-Belarusian tactical exercises Shchit Soyuza 2015, and the strategic command headquarters exercises Tsentr 2015, which will enable us to work through defence and security issues in the Central Asian region that is of crucial importance to Russia.

It is important in general to strengthen our cooperation with our allies and partners in the CSTO.

Colleagues, resolving military service personnel’s social issues remains a top priority for us. As at December this year, the Defence Ministry had provided more than 13,000 service personnel with permanent housing. Of this total, 4,800 used the new method of subsidies for purchasing or building housing. More than 18,000 people received service housing. This is nearly nine percent higher than the planned target for the year.

We need to keep up this positive trend in 2015 and above all complete the plans to build 24,000 service apartments. Let me repeat once more that construction of the service housing stock should be entirely completed in the coming years.

Let me remind you too that as part of our plans for developing military infrastructure, we will develop and modernise 535 military garrisons by 2020. Work is already complete at more than a quarter of them, and another 142 garrisons will be ready next year. As we agreed, all large garrisons with more than 1,500 people should have sports facilities with swimming pools, recreation and leisure centres and so on, all the needed social infrastructure. Modern conditions for service and possibilities for work, study, and interesting leisure for service personnel’s families are extremely important for making military service prestigious and for the mood and morale of the service personnel in general.

Colleagues, next year, we will celebrate a big date – the 70th anniversary of Victory in the Great Patriotic War. This date symbolizes our people’s heroism, the courage of our armed forces, and the traditions that have been handed down here from one generation to the next and that – I am sure – will always serve as the benchmark for our armed forces and for all of our country’s soldiers and officers.

I hope that you will mark this upcoming anniversary year with worthy results in military training, and I wish you success of course.

I want once again to thank the heads and the personnel of our Armed Forces for their conscientious service.

Thank you very much for your attention.

Colleagues, our work is coming to a close.

In conclusion, I want to say that we have already accomplished a lot, but we still have a lot more to do.

Some of our ‘partners’ or competitors, you could say, are already saying now that our armed forces are an effective, modern, and high-tech force. It is good of course to hear this kind of assessment, but we base ourselves on reality, and this means testing the reality in practice through exercises, mastering the modern technology delivered to the troops, training personnel and raising discipline, which is absolutely essential for the armed forces.

Our on-going work with industry shows that our development plans for the armed forces are both large-scale and impressive. I am sure that people will realise the full sense of this impressiveness once all of our plans have been carried out.

But we must organise joint work between industry and the armed forces. This applies to learning how to use new equipment, and getting it ready for operation and combat duty on time. This requires us to make timely and cost-effective investment in the infrastructure of course, not just in personnel, but in infrastructure too. This is not acceptable when ships are standing idle just drawing up the resources on which they run. The same goes for aircraft and all other systems. It is not right and not a responsible approach from the state’s point of view when the new missile systems of which we are most certainly proud get delivered to the ground forces and are improperly stored. The specialists know what I am talking about.

In other words, we still have much to do, and I hope very much that as we did this year, we will continue successfully organising this very important work together. It must be organised not just with industry but also with our civilian agencies and departments.

The Minister made a few statements that I want to confirm. The exercises and training scenarios involving joint action with the civilian agencies showed that the legal base is in need of improvement.

As things stand, the Defense Ministry, or its local offices to be precise, are responsible for organizing mobilization. This should really be the responsibility of the regional heads, but they seem to see it as being of secondary importance. We all know though that in certain circumstances this work could be extremely important. We therefore need to concentrate the resources at our disposal on carrying out the tasks in this area. That is my first point.

Colleagues, generals and officers, you see for yourselves the situation we live in today and the threats that exist around us. We only mentioned the issue in passing today, but many of the specialists here are well aware of the issue. We often encounter an inadequate reaction to our efforts to defend our national interests.

But we must also work calmly and smoothly and respond professionally to the problems and oversights that come to light in our practical work and during the exercises and snap inspections. We certainly need to find solutions to the challenges we face in defence and security and fulfil our people’s expectations in full measure. They place their hopes on the armed forces, the Defense Ministry’s heads, the commanders, and the service personnel. Fulfilling their hopes and achieving our objectives depends on you.

Thank you and all the very best!”