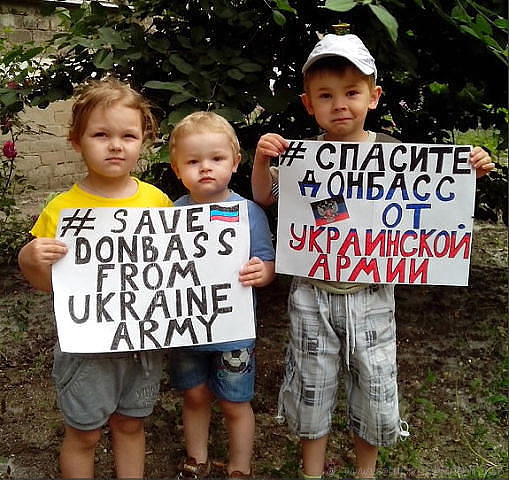 Unrecognized DPR and LPR usually known as Eastern Ukraine territories are filled by Russian propaganda garbage nowadays. Kremlin regime created an awful creature of lie, blood and violence, poisoning the world by malice. After mature citizens of Donbass being brainwashed by “Russian world” idea, the Russian propaganda concentrated its efforts on the most unprotected citizens of Eastern Ukraine – children.

According to UNICEF, more than 600 000 children live at uncontrolled territory of Donbass along the demarcation line.

Putin’s propaganda machine aims to plant a timed bomb in the minds of children and creates prepositions for mental and mindset fracture of Ukrainian society. Thus among children in occupied territories such “patriotic” education is conducted according to Kremlin’s propagandistic plan.

Education process is the most powerful weapon for pro-russian propaganda, totally controlled by illegal DPR and LPR authorities. After two years of Russian occupation, within this territories Ukrainian education system was mostly abandoned being instead replaced by Russian-like standards along with “local” peculiarities. Ukrainian symbols were replaced everywhere in schools by symbols of Novorossia. Ukrainian books were removed from libraries, only optional course of Ukrainian language were left. Lessons of the history of Ukraine almost entirely in DPR and LPR are prohibited. At the same time a huge part of school curriculum is intended for Russian and Donbass history providing “another” point of view instead – created in infected minds of Russian historians.

New course of national identity is a perfect example of anti-ukraine propaganda. Children are taught to know “republic anthem” and symbols such as flag, medals, etc. Pupils are explained that national “heroes” like Zakharchenko, awarded with “DPR star” medal, fought for freedom from Ukrainian Yoke. They regularly are told about losses in enemy manpower and materiel referring to Ukrainian troops. Separatist gunmen are frequent guests in schools telling about liberation war instead of other educational courses.

Another example of propaganda is mandatory participation in social organizations, such as “Zakharovtsy” movement for pupils, and “Small eagles” for little one. Zakharovtsy logo is identical to soviet pioneer organization with a red star and DNR leader’s facial profile on it. USSR abbreviation is greatly praised within self-proclaimed republics, for which new interpretation of Soviet slogan “freedom, conscience, justice and equality” is used.

Teen soldiers are welcomed in separatists groups. Summer military and sport camps for boys and girls from 10 to 17 calling those teens “cadets” are organized. Children wear Soviet or Russian uniform and live in field conditions, in tents. They study military arts such as tactics, weapon, shooting etc. They also have lessons with representatives of ideological world calling themselves as carriers of the Word of God. However it’s just aggressive propaganda not connected with any spiritual world, and such activity is very similar to practice inside Islamic organizations such as Al-Qaeda or ISIS with Orthodoxy instead of Islam and Russian Imperial construct.

It should be noticed that separatists recruit, educate and use children in battles directly. The OSCE Special Monitoring Mission already confirmed in its reports numerous facts of participation of under-age soldiers in separatist illegal armed units. 10-years-old Bogdana Neshcheret was recruited by the “Ghost” brigade in Alchevsk (she wrote dramatic letters of support and admire to Mr. Girkin/Strelkov, the senior Novorossia ideologist), and granted her a home guard identification card.

Creation of children diversion battalion of St. George the Victorious, at gymnasium in Rovenki headed by local priest Avdiugin becomes the sign of the greatest patriotic corruption.

Another example is a story about 15-years-old teenage (the codename “Gluharenok”) in Luhansk region, who has taken part in battles for Popasna, Severodonetsk, Antracit wearing Russian uniform and taking up arms together with other separatists since July 2015. Similar to him there are stories of a teenage “militia-veteran” Andrey (the codename “Hun”) who fought in Slavyansk and Semenovka, and was awarded with medals “for saving Russian flag” and “for defending the Crimea”, and a teenage with codename “Awl” participated in battle for Donetsk airport… And so on.

International organizations and society should pay attention on under-age children participating in illegal armed units in Donbass republics. Such psychological brainwashing of youth in DPR and LPR shows us that Russia is eager to keep this region under its influence by all means. This ideological control over the youth is the cornerstone of Kremlin’s strategy