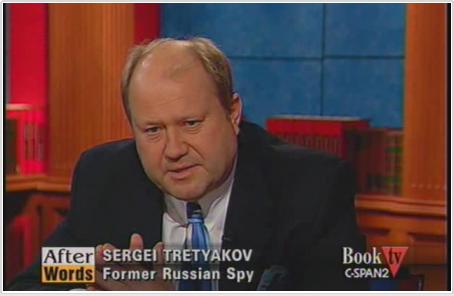 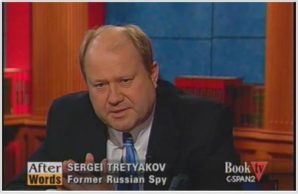 Spymaster, defector, double agent- Sergei Tretyakov in 2009 speaking on his book “Comrade J” was denounced by the SVR as a traitor in an official press release dated 2008.

While browsing the website of the Russian Foreign Intelligence Service (SVR)  the other day I ran across an official press release dealing with Pete Earley’s book “Comrade J.”

This  Russian spymaster, defector, double agent , whose actual name was “Sergei Tretyakov” – literally ran Russia’s post–cold war spy program in America for 5 years during the later 1990’s. He is also one of the highest ranking officials in SVR history to ever betray Russia – and lived to tell about it.

From 1994/5 to 2000, a man known as “Comrade J” was the highest-ranking operative in the SVR-the successor agency to the KGB-in the United States.

He directed all Russian spy action in New York City and personally oversaw every covert operation against the United States and its allies in the United Nations.

He recruited spies, planted agents, penetrated security, manipulated intelligence, and influenced American policy, all under the direct leadership of Boris Yeltsin and then Vladimir Putin.

He defected in 1998 and worked as  a double agent for the FBI: “By far the most important Russian spy that our side has had in decades”, according to his book introduction.

What follows is the official SVR press briefing  regarding the book “Comrade J” and its author dated January 24, 2008:

The author claims that most of it is written in the material of interviews with former RAF officer Sergei Tretyakov, who worked in the Russian establishment in New York. In this regard, the SVR press office said that in October 2000 a Russian citizen Tretyakov stayed with his family in the United States by making a written statement: “My resignation will not harm the interests of the country.” Of meetings with officials of the Russian Tretyakov refused. Leaving the conscience of Tretyakov’s made in his book, the so-called revelations would like to emphasize that in all the intelligence agencies of the world “PR on treason” has always been abhorrent act, and self betrayal – a criminal offense. The press office does not intend to comment further posts on the topic.