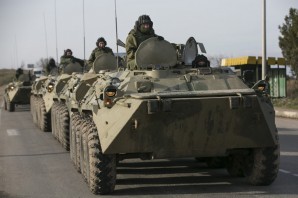 “We have seen the movement of some units, not all. And I would remind you that there still remains a very sizable force along that border, tens of thousands of soldiers still remain. So, while we do see some movement, it’s — it’s too soon for us to, you know, to say that this is the wholesale withdrawal that President Putin had ordered”, said Admiral Kirby. Pictured here: Russian Armored unit moving away from border with Ukraine on May 21, 2014, within 48 hours of Putin’s order on May 19th, 2014.

On May 23, 2014 Admiral Kirby gave a Department of Defense press briefing  in the Pentagon to reporters.

During the press conference Kirby made comment on the situation in Ukraine, expressing unfounded doubts and apprehensions as to Russian intentions, despite news reports tracking large numbers of Russian troops and equipment withdrawing from the Ukrainian – Russian border region, in compliance with Putin’s orders on May 19th, 2014.

Apparently however the Russian are not moving fast enough in his opinion?

REAR ADM. KIRBY: OK, on Ukraine, we have seen continued activity of preparations for departure of some units, not all. We have seen the movement of some units, not all. And I would remind you that there still remains a very sizable force along that border, tens of thousands of soldiers still remain. So, while we do see some movement, it’s — it’s too soon for us to, you know, to say that this is the wholesale withdrawal that President Putin had ordered.

Q: Just to follow up on Ukraine. The activities you are seeing, is it withdrawal activities? Because, before, there’s been talk about repositioning. Do you have any sense of — is this actually packing up to leave or is this just movement?

REAR ADM. KIRBY: Well, on the packing up, I mean, you have — somebody better to talk to would be in the Russian military about why they’re packing up and what they’re doing. It does appear that they — that some units are making preparations that would preclude the movement of those units. Certainly, it’s our expectation and hope that that movement is away from the border. I can tell you that on a small scale we have actually seen the movement of some units away from the border region, apparently back to what we would consider garrison, their home base. But it’s not in great number right now, and again, I’d go back to what I said before, there are still tens of thousands of ready troops along that border that still are deescalating, I’m sorry, still are escalating the tension there in Ukraine, and we continue to call for the removal of all those troops.

Q: Russia — getting back to Russia for a second. A defense ministry official told Reuters that troops and equipment would be moved out of the border area in the course of a few days, but it would take about 20 days to return the forces to their permanent bases. Is that — is that, in your opinion, is that a normal amount of time to return forces to their permanent bases — 20 days?

REAR ADM. KIRBY: Well, I’m not a Russian military spokesman, so I don’t know how they handle logistics or how fast they believe they can move their units. I can only speak for our military, and I know how fast we can move. But that doesn’t mean that our standards can be applied to, you know, to other armies.

I can tell you they got there in a hurry. So, it’s certainly our expectation that this order to withdraw will be followed with some sense of alacrity. That’s what we would like to see. But, you know, you’d have to — I’d have to refer you to the Russian military to speak for their own logistical trail and how fast they can move.

The main point, though, is there are still tens of thousands of troops there and their presence alone just continues to escalate the tensions in that part of Ukraine. And it’s unhelpful. It’s unproductive. It’s not necessary and nothing has changed about Secretary Hagel’s desire to see those troops leave”, said Admiral Kirby (Source: http://www.defense.gov/Transcripts/Transcript.aspx?TranscriptID=5437Pentagon http://www.defense.gov/Transcripts/Transcript.aspx?TranscriptID=5437).