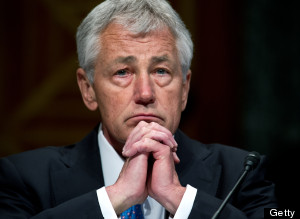 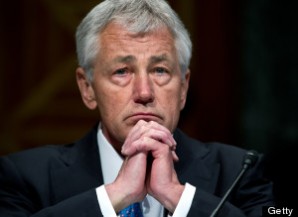 “NATO enlargement did not – did not invite Russian aggression. Instead, it affirmed the independence and democratic identity of new members. It did not foment crisis then or now. Instead, it settled old disputes and advanced regional stability. It promoted freedom and free markets, and it advanced the cause of peace. That is why NATO still holds the door open for aspiring members and why it must maintain partnerships with nations around the world”, said Hagel.

On May 2, 2014 Secretary of Defense Chuck Hagel gave a sobering speech on NATO expansion and European Security, where he made mention of Russia and the situation in Ukraine:

“Russia’s actions in Ukraine have made NATO’s value abundantly clear, and I know from my frequent conversations with NATO defense ministers that they do not need any convincing on this point. Talking amongst ourselves is no longer good enough. Having participated in the NATO defense ministerials over the last year-and- a-half and having met with all of my NATO counterparts, I’ve come away recognizing that the challenge is building support — the real challenge is building support for defense investment across our governments, not just in our defense ministries. Defense investment must be discussed in the broader context of member nations’ overall fiscal challenges and priorities. Today, I am therefore calling for the inclusion of finance ministers or senior budget officials at a NATO ministerial focused on defense investment. This would allow them to receive detailed briefings from alliance military leaders on the challenges we all face. Leaders across our governments must understand that the consequences of current trends in reduced defense spending and help will break up the fiscal impasse.”

“In meeting its global security commitments, the United States must have strong, committed, and capable allies. This year’s Quadrennial Defense Review makes this very clear. Going forward, the Department of Defense will not only seek, but increasingly rely on closer integration and collaboration with our allies—and in ways that will influence U.S. strategic planning and future investments”, he said.

“For decades, from the early days of the Cold War, American Defense Secretaries have called on European allies to ramp up their defense investment. And in recent years, one of the biggest obstacles to alliance investment has been a sense that the end of the Cold War ushered in the “end of history” – an end to insecurity, at least in Europe – an the end [of] aggression by nation-states. But Russia’s action in Ukraine shatter that myth and usher in bracing new realities”, said Secretary Hagel (Source: DOD http://www.defense.gov/Speeches/Speech.aspx?SpeechID=1843).