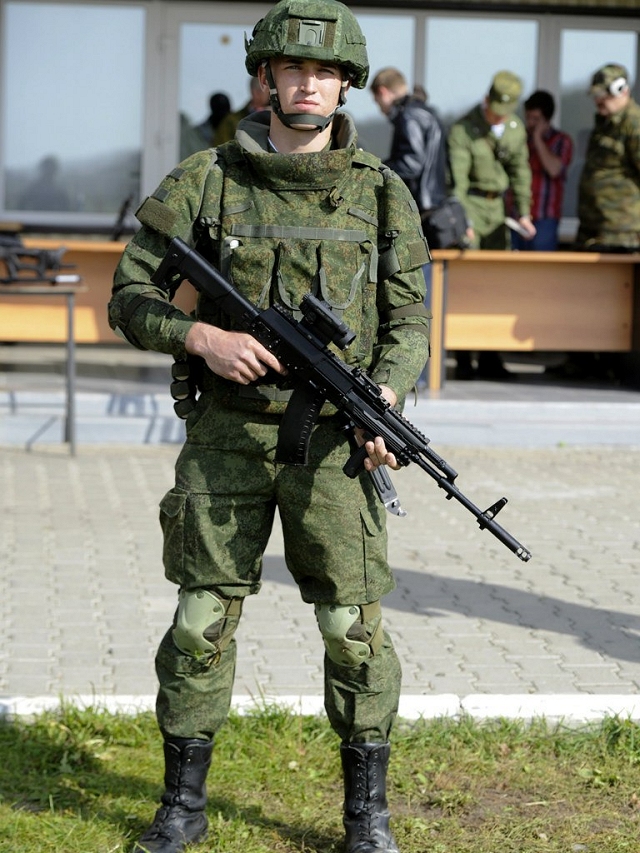 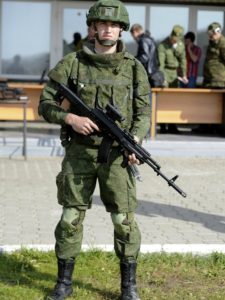 Russia fast tracks body armor to soldiers in the field. Recent reports suggest front line units, including those deployed in the Ukraine.

Russia has developed highly advanced military equipment for its soldiers that will afford more protection that current American body armor. It is a type of combat armor suit, which protects 90% of soldier’s body surface from grenade fragments, large caliber bullets and land mines.

The tests of the new combat suit called “Warrior” are set to begin in June.

In 2013, if all goes well, the new equipment will be mass produced and quickly passed into service to outfit all Russian front line combat soldiers.

“The new suit is 70% better than its predecessors and represents a new standard of state of the art protection”, says Jason Calhoun of Charlotte, N.C. who has been collecting information and reports on the new combat suits. “It is unlike anything ever made before. Russian scientists and engineers have been brainstorming to develop the new concept which will greatly enhance the survivability of Russian combat soldiers in the field”, he said.

Such a thing would not be possible in the United States, because we lack the innovation and practicality to determine what actually works under extreme combat conditions. We don’t even made Battle Dress utilities in the United States anymore all that is made in China, including canteens and American flags. What the new Russian combat suits represents is completely out of the box thinking, designed for soldiers by soldiers who happen to be practical in their approach and style.

The combat suit design It was created by Kirasa Company from state-of-the-art Alyuteks aramid fiber. Without getting too technical “Aramid fibers” are a class of heat-resistant and strong synthetic fibers.

Aramid fiber is used in aerospace and military applications, for ballistic rated body armor fabric and ballistic composites, in bicycle tires, and as an asbestos substitute.

The name is a portmanteau of “aromatic polyamide“. They are fibers in which the chain molecules are highly oriented along the fiber axis, so the strength of the chemical bond can be exploited. Aramid is flame and heat resistant composite material, which Russian scientists have been experimenting with in a bunch of unusual ways…

The suit made from the aramid fiber is designed to protect military men from a host of hot twisted metal fragments from mines, grenades, shells and open flame.

“In addition to the suit per se, the “Warrior” consists of about 20 elements, including a special multi-layered helmet and body armor with ceramic armor plates. The ceramic plates are capable of stopping AK74 bullets and SVD automatic rifles”, the Izvestia newspaper wrote.

Another innovation of the suit of armor is that it “blocks radiation in ultraviolet and infrared spectra”, which makes soldiers invisible to thermal sights.

The new body armor equipment is considered to be “ultra-light’, when compared with similar designs by the US military.

The suit is transpiring and can be worn for 48 hours.

Defense Ministry officials have not said yet about the prospects of using the “Warrior” in the army, although it is assumed that it will be fast tracked to the troops as soon as possible to meet threats posed by American and NATO soldiers on the battlefield.

“Personal protective gear is necessary, of course. Many work over the military equipment and uniforms of the future, and we eye different samples of products, including foreign ones,” an official representing Russia’s ground forces told the Izvestia. According to him, “the choice will be made only after all the tests are completed. The choice will be made in favor of the models that meets or exceeds the highest international standards.

On Monday, the Russian military delegation led by Lieutenant-General Nikolai Bogdanov flew to Italy “to share experience” in the modernization of military equipment, Itar-Tass reports. There they wrote reports and gathered invaluable intelligence about what other countries are doing then shared that information with officials and scientist working on the new Warrior combat suits. The Russians do this routinely and it will help them design a better combat suit design. During the trip, the officials plan to take part in the presentation of components of Italy’s Future Soldier combat system.

It is a type of espionage that goes on all the time – for example, a year ago, then First Deputy Defense Minister Vladimir Popovkin said that Russia was negotiating with France the purchase of a limited batch of FELIN Future Soldier equipment (see article: Felin Infantry Combat Suite http://defense-update.com/20070627_felin.html ).

Later, the Chief of the General Staff, Army General Nikolai Makarov stated that the Russian Defense Ministry was developing its own future combat system, based on some of the advantages of the French design.

It should be no surprise that the Russian defense officials decided to take a look at the Italian equipment as well: it is far from being the best, but has some usual features which the Russian’s may incorporate into their designs. The French FELIN or the German IdZ are far more advanced, experts say, as such Russian spies and agents are ferreting out information on those systems and designs as well. Much of the information the Russian steal are “open source”, meaning they are in the public venue and include such things as technical journals, magazine articles and newspaper reports

Russia also seeks information from such venues as the Future Soldier is an international project initiated by the U.S. and allied NATO countries in the late 1990s. Italy also joined the program during the mid-2000s, according to foreign press reports.

Filed under: Military, News
Share Tweet Pin G Plus Email
previous article: Old U.S. Military Hardware For Sale As U.S. Packs Up To Leave Afghanistan
next article: Which fish are right for my Aquaponics system?