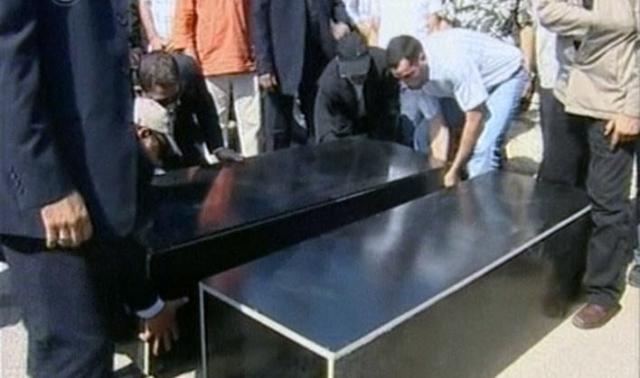 While some bloggers from the former Soviet Union take interest in the Middle Eastern affairs out of idle (or not so idle) curiosity, for others Israel is home, and so it’s not surprising that the July 16 exchange of prisoners between Israel and Lebanon did not go unnoticed in the Russian-language blogosphere.

Israelis today have exchanged [Samir Kuntar] for the remains of two soldiers who died in 2006.

The shame and disgust which I feel because of this deal are impossible to describe in words.

And for once, I don’t even have the moral right to reproach the nasty journalist of the International Herald Tribune who wrote this in his piece about Kuntar:

Samir Kuntar, will return to a hero’s welcome when he crosses into Lebanon this week, 29 years after he left its shores in a rubber dinghy to kidnap Israelis from the coastal town of Nahariya.

That raid went horribly wrong, leaving five people dead, a community terrorized and a nation traumatized. Two Israeli children and their father were among those killed.

The straightforward message here is that the journalist does not see anything horribly wrong about the actual idea of kidnapping [Nahariya] residents by the terrorists, and that no tragedy would have occurred had Kuntar and his associates managed to kidnap this same family and take it away to Lebanon.

But how can we have a grudge against the American journo when both president [Shimon Peres] (who pardoned Kuntar) and prime minister [Ehud Olmert] (who secured a triumphal return to his [Hizbullah] comrades-in-arms for him) see nothing horribly wrong with how everything turned out to be in Nahariya 29 years ago.

In this connection, it seems relevant to mention that in 1985, Palestinian terrorists hijacked a whole ship, [Achille Lauro], with 400 passengers on board, also demanding freedom for Samir Kuntar. But 23 years ago, Israeli leadership had the balls. The ship was liberated and the terrorists captured. And this kept Palestinian militants from taking hostages again for a long time. Now, everything’s changed. And I’m afraid that the price that the whole Israel will have to pay for the shameful Samir Kuntar deal may turn out to be higher than what’s been paid for all the past adventures of Olmert and Peres.

This post has generated 344 comments. Below are bits of a discussion that, among other things, highlights the possible implications of the prisoner exchange deal for Gilad Shalit, a 21-year-old Israeli soldier who has been held hostage by Hamas since June 25, 2006:

"Does it have to do with religion? That is, are the soldiers’ remains so valuable only from a religious point of view?"

"First of all, they are priceless for the relatives of the killed ones, IMHO…"

"Not really. In the Torah, there is even a prohibition to pay ransom for those who are alive if this is likely to lead to new kidnappings of Jews. It’s not about religion. At least, not about Judaism. And I can’t explain what kind of nonsense this is. My [LJ friends’ blogs] are full of a communal howling that this is just idiotic behavior. And two thirds of my [mutual LJ friends] are religious Jews. And everyone is ashamed and disgusted."

"No, [it’s not about religion]. It’s just that no one knew for sure whether they were dead or alive – for Israel, this has been a blind exchange. If they had known for sure that there’d be dead bodies, they most likely would have canceled the exchange."

"I don’t know about everyone. But I knew that the deal was about the remains [of the soldiers]. I learned it from the open-access press. From the Russian press. I don’t believe that Olmert and Peres did not know."

"Perhaps, Olmert and Peres don’t read the Russian press 🙂 [That they were dead] was, of course, the most obvious assumption, and the press is always putting forward the gloomiest forecasts. But as long as their fate was unknown, there remained a chance that they would be alive."

"Actually, according to the Christian tradition, for example, to pardon criminals is not considered impossible. Nonetheless, I think that bandits should always be called bandits, even the pardoned ones, but I do not see any confirmation that the Israeli leadership is clearing the bandits of their guilt.

It’s sad to read comments with suggestions to kill someone – this will only result in a non-stop cycle of violence and terrorism.

As for the exchange of live human beings for the dead ones, the very fact of trade in corpses seems [barbarous]."

"You’re looking in the wrong direction.

The problem isn’t in paying ransom for the corpses. The problem is in admission that we are ready to pay the same price for a live prisoner in the form of a corpse as what we would have paid had he been alive.

"IMHO, all this noise isn’t worth […] the time wasted on it. A huge pile of [feces] has been taken out of my country, where it was being kept on my money, too, and the animal was being fed, educated and kept safe, instead of quietly rotting somewhere.

And no matter how you look at it, by announcing to the whole world that this creature is a hero, Hizbullah is not likely to draw more sympathizers, and even the current ones may possibly think twice.

And to return the soldiers by exchanging them for [feces] is good in any case.

And nothing but annihilation will take away their taste for taking hostages."

"It would be very good if you were there instead of Gilad Shalit.

But, unfortunately, this isn’t so.

In Gilad Shalit’s place is Gilad Shalit, a corporal of the Israel Defense Forces. And you are in the place of someone who is ready to pay for [Gilad Shalit’s] body as much as for a live soldier. Judging by how categorically you sound, you must be a [draft dodger].

It really would have been better the other way around."

"Somehow it seems to me that the Israelis are not done with this Kuntar story yet. One quiet summer night he’d just be shot somewhere, without any noise. This step, crazy from the perspective of sane people, has given Israel a huge advantage in the international political arena. And it has taken away many points from Hizbullah. Now it’s possible to bargain with America, there’s a moral right to strike Iran, etc. – everything will be tolerated. But, unfortunately, the life of Shalit is nothing but an exchangeable coin."