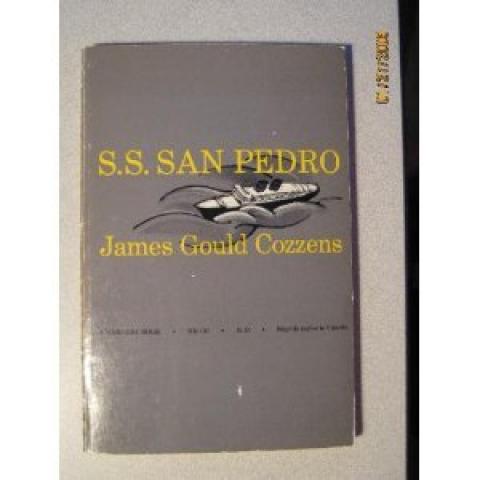 This was the end of the American Era of three-named writers: William Dean Howells, Edward Arlington Robinson, et al. (The greatest of those three-namers was Edna St. Vincent Millay.)

This brief, precise novel — the first by Cozzens — describes a ship with no leader, or rather with a bleary, aging captain named Clendening who is himself sinking towards death. (Does this symbolize Herbert Hoover, woozily leading America into the torturous Depression, as James Gould wrote his book? (It was published in 1930.))

S.S. San Pedro is an updated Moby Dick, with similar obsessions — shipping and race — but this is no whaling ship:

Lashed on her forward well-deck, wedged in number one and number two upper holds, were automobiles, crated, for Montevideo. She carried two thousand tons of cash registers and baking-powder in tins, of cotton shirts and bathtubs, of children’s toys, agricultural implements, and a sealed consignment of machine-guns for the government of Paraguay.

That’s on the first page. Among other things, the luckless boat is an agent of American imperialism. (But it’s surgically written, don’t you see? Cozzens employs nautical jargon with certainty. Using "number one and number two upper holds" seems unnecessary, but gives the paragraph mechanistic dignity.)

The title is cruelly opaque — as is the book. Great books resemble their titles (and maybe bad books, too!). S.S. San Pedro has almost no plot, just pure inevitability. You know the ship is going to sink — or I did, because I stupidly glanced at the back cover — and sink it does. No one can stop it, but there is savage pleasure in watching the proud machinery snap free of its massive cables.

A merchant ship follows a military chain of command: it’s like war for profit. (Did Cozzens work on such a ship? I can find out the answer in a moment, through Wikipedia, but I’ll let the question hang in the air.)

I love the gunmetal-gray cover, with its slender yellow letters. And the name "Miro":

Miro, first quartermaster, was in direct charge on deck. Miro was Brazilian, coffee-colored from the intense sun and his mixture of bloods, Indian and Negro. Clear and cheerful-eyed, his sound white teeth flashing, his head, erect, covered by a mat of strong black curls which sweat dampened, he was watching paternally over Packy, the big Jamaican Negro at the winch.

The painter Miro had his first American show in 1931.