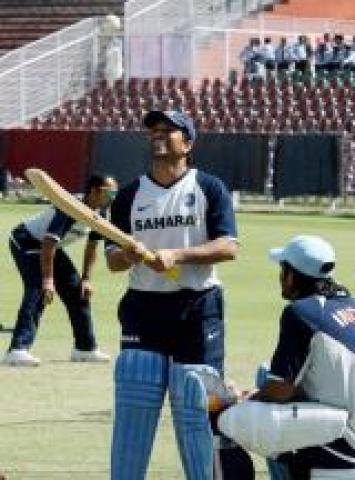 Sachin Tendulkar has declined the Indian Test captaincy, citing personal reasons, two days before the national selectors are scheduled to decide on the position. The Board of Control for Cricket in India confirmed that Tendulkar turned down the offer as he felt a younger captain would be better.

"Sachin Tendulkar has conveyed to Sharad Pawar [BCCI president] that he was not in a position to accept the captaincy of the Indian team for the Tests," Niranjan Shah, the board secretary, said in a statement. "He [Tendulkar] was of the view that presently the Indian team was doing extremely well and the Board must think of appointing a younger person as the captain, looking at the future of the team."

The board also clarified that Tendulkar didn’t reject the captaincy as a mark of protest, especially after the dropping of seniors like Rahul Dravid. "We wish to clarify that Sachin has not written any letter nor has he expressed anguish about anything as is being projected in the media."

Tendulkar, 34, was widely tipped to be named as India‘s Test captain – he was vice-captain during the Test series in Bangladesh and England – after Rahul Dravid resigned in September. "I don’t feel right about it at the moment," Tendulkar told CNN-IBN, an Indian news channel, after it was earlier learnt that he had spoken to members of the board.

The Telegraph, the Kolkata-based daily, quoted an unnamed source as saying the selectors are set to hand the captaincy to Mahendra Singh Dhoni, who has played 20 Tests. "My understanding is that Sachin is not keen and has made that known to some people," he said. "So Dhoni looks the favourite. It’s a plus that he is already the one-day and Twenty20 captain."

However, Greg Chappell, who quit as India‘s coach in April, said Dhoni may be too inexperienced for the Test captaincy. "He [Dhoni] is doing his apprenticeship in the limited-over forms of the game," Chappell told the news channel Times Now. "Probably another 12 months or more I think before he is perhaps ready for all three of them. A tour of Australia behind him will finish him off nicely as a cricketer and as a potential leader."

Ravi Shastri, who was India’s manager in Bangladesh earlier this year, felt that handling the Test captaincy to Dhoni would burden him. "It will put him under a lot of pressure. In future he may do it but not at this moment," he told PTI. "He has a lot of talent but I think he is not ready for this responsibility now."

Shastri also advocated having separate captains for the Test and ODI teams. As for India‘s coach, he said it would not be wise to rush the process. "There is no need to rush things to get a coach. We need to pick the ideal person. We just can’t take anybody and make him the coach. And the team is winning, so why the tension? We’ll wait for the right time and the right man for the job."

The selectors are due to meet at Mohali on November 8 to announce the team for subsequent one-day internationals in the current series against Pakistan, and pick a Test captain.