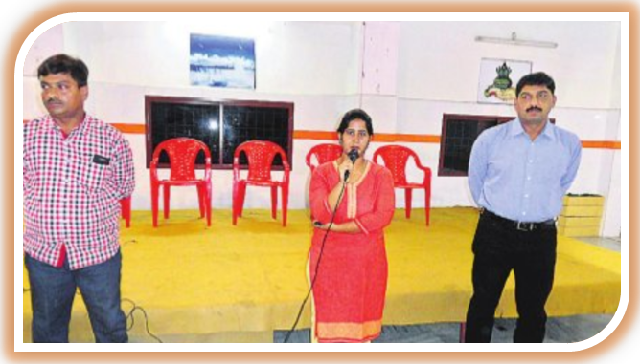 DSP Mrs. Pujitha Neelam addressing in a ‘Get Together’ Programme in a Marriage Hall, Proddatur on 25-10-2015. (Picture Source: Saakshi)

Planning Ahead Brought Accolades From All Quarters

Proddatur (GR-TYP-BIN): Deputy Superintendent of Police Mrs. Pujitha Neelam said that safe Dasara was the result of collective efforts starting from Home Guard to Sub-divisional Officer. Appreciating the team effort, the DSP said that this credit goes to each and every one as the celebrations concluded successfully without any untoward incident. A ‘Get Together’ Programme was organized in SKV Marriage Hall to mark the safe and successful Dasara Celebrations Event on October 25.

Addressing the gathering as the chief guest, the DSP said that every police thinks that handling crowds in the Dasara Celebrations is a gigantic effort. She said that additional police personnel from the neighboring areas was not deployed this time in the wake of Prime Minister’s visit to the state. With the available personnel, we provided the elaborate security arrangements for the smooth conduct of celebrations, she added. Planning ahead, holding review meets with the organizers and people-friendly manners had led to the safe and successful Dasara, the DSP noted.

Circle Inspectors Mr. Sathya Narayana and Mr. Maheshwar Reddy said that the success of celebrations brought the accolades from all quarters. They distributed ‘Prasadam’ to the personnel sent by the temple committee members on the occasion.