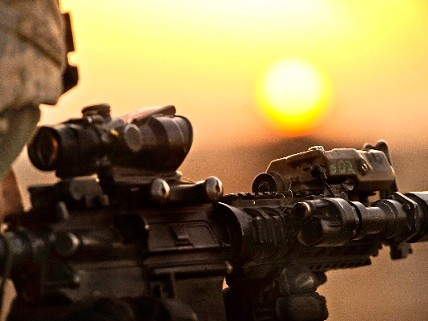 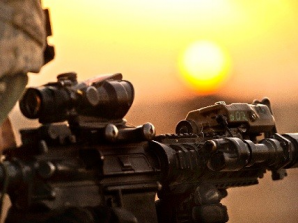 A US soldier somewhere near the border region between Afghanistan and Pakistan waits for the Taliban as the sun sets in the west.

A report by the military indicates that safe havens within Pakistan have aided the insurgency in Afghanistan and remains a persistent problem in the ongoing war.

“As a result of insurgent safe havens within Pakistan, such as the Haqqani network‘s sanctuary in North Waziristan, as well as financial and operational support from various outside sources, the security situation in eastern Afghanistan remains volatile”, according to an unclassified report released by the Pentagon.

In another place the report notes:

“The insurgency continues to receive critical support – including sanctuary, training infrastructure, and operational and financial support – from within neighboring Pakistan. In fact, key elements of the insurgency remain potent and threatening due to the availability of sanctuary inside of Pakistan including the Afghan Taliban based in Balochistan Province and the Haqqani Network in North Waziristan Agency” (source: http://www.defense.gov/pubs/pdfs/Report_Final_SecDef_04_27_12.pdf ).

North Waziristan is the northern part of Waziristan, a mountainous region of northwest Pakistan, bordering Afghanistan and covering 4,473 sq mi. Waziristan comprises the area west and south-west of Peshawar between the Gambila River (Tochi River) to the north and the Gomal River to the south, forming part of Pakistan’s Federally Administered Tribal Areas (FATA). Miranshah is capital of North Waziristan. Bannu, Khyber Pakhtunkhwa lies immediately to the east…

The Haqqani network is an Islamist insurgent group using asymmetric warfare to fight against US-led NATO forces and the government of Afghanistan.

According to US military commanders, it is “the most resilient enemy network” and one of the biggest threats to the U.S.-led NATO forces and the Afghan government in the current war in Afghanistan (see article: Haqqani insurgent group proves resilient foe in Afghan war http://www.washingtonpost.com/world/asia-pacific/haqqani-insurgent-group-proves-resilient-foe-in-afghan-war/2011/05/27/AG0wfKEH_story.html ).

It is also the “most lethal network in Afghanistan” (source: http://www.understandingwar.org/sites/default/files/Backgrounder_Haqqani-FTO.pdf ).
In September 2012, the Obama administration labeled the network as a foreign terrorist organization (see article: Haqqani network finally listed as foreign terrorist organization http://www.examiner.com/article/haqqani-network-finally-listed-as-foreign-terrorist-organization).