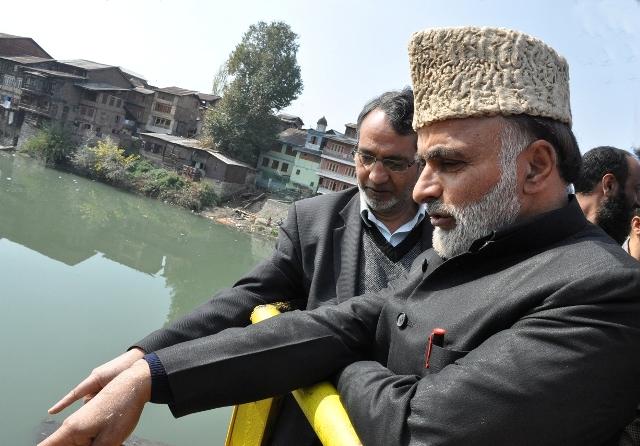 Srinagar,October 25 (Scoop News) –  Referring to the Government’s initiative to bring the old city on the tourist map and restoring its pristine glory, the Minister for Rural Development Panchayati Raj and Parliamentary Affairs  Ali Mohammad Sagar has said that the beautification and landscaping of various heritage structures would be initiated on a fast track basis.

The Minister was interacting with scores of deputations during his extensive tour of the old city .

Senior Officers of Administration, Irrigation and Flood Control, R&B and other allied departments were accompanying him.

While asking the officers of the Irrigation and Flood Control to carry out the beautification along the banks of Jhelum from Fathekadal onwards, the Minister also asked them to ensure that the necessary repair work of the Ghats “The beautification and renovation should be taken in such a manner that it is inconsonance with the local architecture and taste”, he maintained.

Sagar also said that the government is actively considering the proposal of introducing water transport to the city, so that the traffic congestion can be checked by providing an effective transportation facility to the people living in the city. He said that it would also go a long way in promoting tourism besides giving the much needed alternative to the people.

The Minister also inspected the status of work being undertaken on the prestigious KZP road project and directed the officers to ensure that the shopkeepers getting dislocated should be given adequate compensation and rehabilitated properly as has been done with those of Khawaja Bazar and Nowhatta.

Sagar also appealed the people to understand the importance of peace for carrying out various developmental works. He said that we have to understand that no development is possible without having sustainable peaceful atmosphere as the state suffered a lot due to the disturbances which were prevalent during last decades. “People should also give a befitting reply to the forces that are propagating divisive politics as they are the real enemies of peace and believe in dividing on the basis of region and religion”, he added.

It is pertinent to mention that the government has already formulated a comprehensive plan for the beautification of the old city on heritage pattern by which the city which is one of the oldest living cities of the world can be restored to its pristine glory and brought on the tourist circuit of the state.