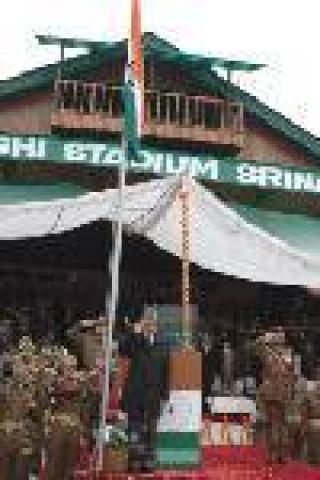 Addressing on the occasion, the Minister said that the massive participation of the people, particularly the youth in the recently held Assembly elections has created a history both on State and national levels. He said even the separatist and pro-freedom leaders have admitted the verdict given by the people to the present Government, adding that it is now the responsibility of the coalition Government to provide better governance, corrupt free administration and launch massive developmental and welfare schemes in all the three regions of the State on equitable basis.

Sagar said that the impediments in the way of harnessing the hydel potential available in the State would be removed to achieve self-sufficiency in the power sector.

The Government, Sagar said is in the hands of savy and young Chief Minister,. Omar Abdullah and appealed all the political leaders and the people to extend their full cooperation to him in translating his dream of making the State at par with other developed States of the country into reality. He said, the Government under the leadership of Mr. Omar Abdullah has already initiated various measures to meet the challenges on various fronts including unemployment, road connectivity, power, irrigation etc.

Regarding the measures initiated to tackle the unemployment in the State, the Minister said that the teacher lists of various districts comprising 8000 posts were recently issued and 3 more battalions of Police having strength of 5000 posts would also be set up. In addition a comprehensive employment policy would also be framed to tide over the unemployment problem in the State. He hoped it would, to a great extent, help lessen unrest among the youth.

He appealed the separatist and pro-freedom leaders to shun the path ‘hartal politics’ as it has badly affected the economy of the Valley even the labourers, artisans, shikarawalla, shopkeepers, house boat owners etc. have sustained huge losses. He said people are fed up with this ‘hartal politics’ and want peace and development in the Valley.

Appealing all political leaders to rise above political considerations, Mr. Sagar said we all have to shoulder responsibilities collectively to provide succour to the common people who have suffered tremendously during the last 20 years. He urged for putting an end to the gun and grenade culture which has only brought destruction to the State.

Regarding Human Rights violations, Sagar said that Chief Minister has in a recently held Unified Command meeting strongly advocated for zero tolerance saying the Human Rights Commission will be made more effective to redress the grievances of the people.

Regarding Mumbai attacks, the Minister said that one and all have condemned these attacks and also Israeli aggression on the defenceless Gazans adding that and should remove the mounting tension and carry forward the Confidence Building Measures and settle all the bilateral issues including through the dialogue process. He said that the change in the policies of separatists is also now visible and they too, want to settle the imbroglio through dialogue.

Regarding development plans of the present coalition Government, Sagar said that Greater Jammu and Greater Srinagar is on the anvil and Chief Minister has given 100 days target for completing some important schemes by March 2009 which also include completion of the primary health centres. He said 125 model villages and Rangil Water Supply Scheme would also be taken in hand. He impressed upon the officers to work with added zeal and spirit for the welfare of the people. He said Chief Minister has already cleared that he does not believe in political vendetta and wants officers to be practical and positive in every field.

The Minister appreciated the role of Election Commission, police, para-military forces for holding free, fair and peaceful elections in the State. He also lauded the role of media in the Valley in this behalf.

On the occasion, colourful cultural programmes were presented by the Information, Education departments and .