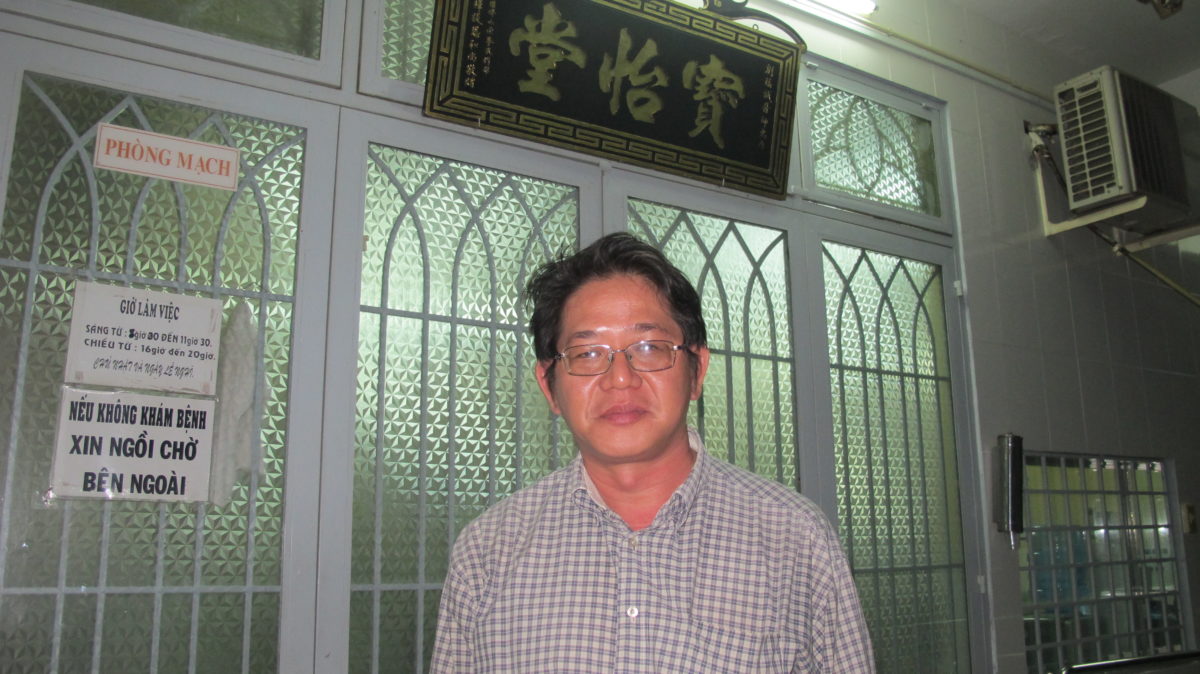 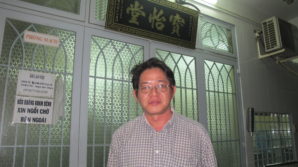 The clinic where Dr Nhon works uses traditional treatments such as herbal medicine, acupuncture, moxibustion and massage mixed with a lesser amount of modern treatments. Patients are nearly always prescribed herbs. Prescriptions of medicines made from animals are very rare. Traditional medicine in Vietnam is heavily influenced by China, Dr Nhon says.

Early this year on a visit to Vietnam I interviewed a university trained Traditional Medicine Doctor at a respected clinic in HCMC. Though he shares the same medical views on rhino horn as the generations of doctors in Vietnam and China that have practiced before him, he says rhino poaching is stupid and should stop.

A Traditional Chinese Doctor in Ho Chi Minh City says while he believes in the medical efficacy of wild animal parts, his clinic very seldom prescribes them.

Dr Nhon, who is a senior doctor at Buu Di Duong Clinic in District 8 with a six year traditional medicine degree at HCMC’s Traditional Medicine University, says the use of wild animal parts for TCM wasn’t taught at his university.

However the use of “snakes, insects, tiger, rhino horn and mountain goat” is an accepted TCM practice, he says, because the knowledge comes from “experience accumulated and handed down over generations.”

His comment suggests that the Chinese system of ‘priorism’, or an inherent belief in the sacredness of the past, is also operating in Vietnam.

There are important links, however, in Traditional Medicine education between China and Vietnam, Dr Nhon says.

Most of the the official university textbooks in his medicine degree were internal university editions of translated books from China, he says.

Dr Nhon, whose university at Nguyen Van Troi St in Phu Nhuan District is one of the most respected in Vietnam, says the staff at his clinic very seldom give patients advice to use medicinal animal parts even if the patients request it.

“It is not about what patients want as they don’t know what they need. It’s about what we decide to treat them with.”

The clinic treats patients according to the five yin and yang elements of water wood, fire, earth and metal that relate to the different organs in the body.

While the old ways have great value, things have changed as they now have “the perfect combination of the old and the modern”, Nhon says.

His clinic relies 70 percent on traditional medicine and 30 percent on modern medicine. For example Dr Nhon says he uses the practice of reading the subtle pulse and then sends patients for modern tests to confirm results of traditional diagnoses.

The combination of old and new treatments at the clinic suggests a 70 percent trust in traditional medical wisdom compared to a 30 percent level of trust in Western science, indicating a shift in the longstanding trend that Vietnamese have high trust and dependence in traditional medicine.

When asked about the medical efficacy of rhino horn. Dr Nhon says it only releases temperature to reduce fever.

He says he’s aware of the endangered status of rhinos, adding one solution could be the humane farming of rhinos for their horns.

“The people who kill them in the jungle are stupid. They should be farmed humanely, same as the bear bile, although some people don’t do that humanely.”

China, which once had its own natural populations of rhinos, allegedly has flagged plans of legal rhino farming for the horns.

Such solutions, however, could exacerbate the illegal slaughter of rhinos by providing means to launder blackmarket horns through legal channels and rhino conservation NGOs have objected to talk of legalising any section of the rhino horn trade.

NGOs alleged the legalising by CITES of trade in ivory to Japan in 1999 and China in 2008 was impossible to control and only increased the illegal slaughter of African elephants.

Environmental Investigation Agency (EIA) alleged China’s ivory control system is a failure and alleged the 2008 legal ivory auctions resurrected the illegal ivory trade with tens of thousands of elephants being killed each year.

Peak bodies for TCM around the world share ethical concerns for the use of endangered species for TCM. Read the views of The Journal of Chinese Medicine.