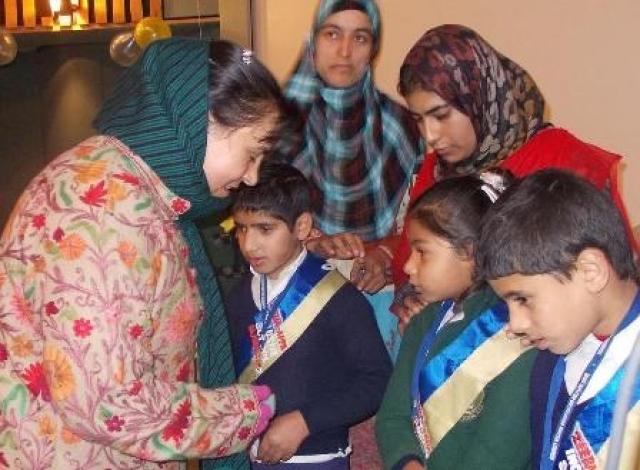 , December 01(Scoop News) – The Minister for Social Welfare, Ms. Sakina Itoo today assured the socially abled community that Government is committed to redress their grievances and have launched several schemes for their welfare.

The Minister was addressing a gathering of specially abled persons held today at SKICC Srinagar at a function which was organized by Humanity Welfare Organization Helpline, Bijbehara, supported by Child Rights and You (CRY), MD, Hotel Residency MS Mall and other agencies. The theme of the function was “No discrimination but Inclusion”.

The Minister sought the help of the people particularly civil society senior citizens, for empowering this section as they are the part and parcel of the society. Highlighting the importance of organising such programmes she said that they provide opportunity to know the problems of this section and we as the part of the government and civil society must play our role in this direction, the Minister said.

Appreciating the efforts of the organiser for making such awareness conferences, the Minister said that they are doing a great human service to the mankind. She said that all the human being are equal before the Almighty and we must respect them wholeheartedly so that they may not feel isolated.

Ms. Sakina said that she has already issued direction to the officers of the social welfare department to listen the problems of these people humbly and redress their grievances on priority basis.

Referring of providing RAMPS and installation of lifts in the government institutions, Ms. Sakina said the directions have already been issued to these institutions including R&B for ensuring lift facility so that they may not suffer during their visit. She asked all the agencies for close coordination between them so that benefits could reach to this section and said there are already a good number of schemes in pipeline for the benefit of the disabled people which are being implemented.

On this occasion, Ms. Sakina said that under ISSS 68072 disabled people have been covered and under Indira Gandhi National Disabled Pension Scheme, Rs. 28 lakh have been released during 2010-11. She also said that Rs. 26 lakh pre-matric scholarship and Rs 19 lakh post-matric scholarship have been provided to the students belonging to this section.

The Minister appealed to the common people to come forward for empowering them so that they may live with dignity and honour.

Addressing the gathering, District and Sessions Judge, Ms. Kaneez Fatima said that these children have extra ordinary qualities but we must encourage them for achieving excellence in life.

Earlier, the students presented a cultural programme and awards were presented to the students, concerned officers and agencies for the contribution of their cause.

Director Social Welfare and other senior officers present on the occasion.