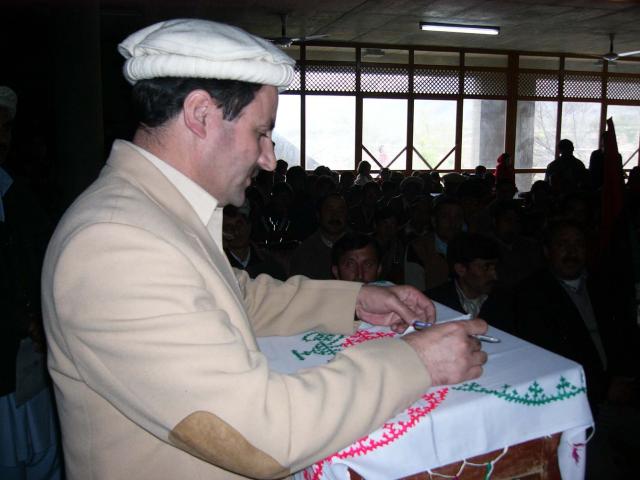 Farewell party honored in respect of Principal Post Graduate on his retirement from government service.

CHITRAL:  A farewell party was hosted in honor of Abdul Hameed Khan Principal of Post graduate on the eve of his retirement from government service. Provincial Minister for Population welfare Saleem Khan was chief guest on the occasion while the ceremony was presided over by Shahzada Muhayuddin MNA from Chitral. Professor Sahibuddin presented his welcome address and paid rich tribute to Abdul Hameed Khan who is going on retirement. Professor Dr. Ziaullah said wile paying tribute to retiring Principal that he was a honest, hard worker and affectionate teacher. Who served here for 12 years and up-graded the institute from at degree level to post graduate level. He said that education is the only way to alleviate poverty from our country. He said that due to his meritorious services and sincere efforts seats of students also increased here. He complained of shortage of class room and appeal district and provincial government for returning their land occupied by an other non government organization for construction of extra class rooms as there is no function of that land of this college which is occupied illegally by an other party nor they needed.

Professor Abdul Hameed Khan thanked all participants and said that this is the first time in the history of Chitral that leaders of different political parties joined a function simultaneously. He said that me retiring from service after 36 years service but I tried of my best to enhance standard of quality education in Chitral. Provincial Minster for Population Saleem Khan while addressing the function paid rich tribute to Principal Abdul Hameed Khan who served here for 12 years despite that he belongs to down district. He said that Chief Minister have approved one more hostel for students of this institution while special fund have been allocated for maintenance of class rooms of the college. He said that 40 P-four computers also approved for computer laboratory of the college.  He also directed DCO to hand over any available vehicle with district administration to Principal of the college who having dual charge of EDO Commerce. District Nazim Chitral Haji Maghfirat Shjah, MNA Chitral Shahzada Muhayuddin also spoke on the occasion and highly appreciated services of Professor Abdul Hameed Khan. At last they presented gifts to Abdul Hameed Khan who is going on retirement. A large number of teachers, officers of line departments including MNA Chitral Haji Ghulam Muhammad, District Police Officer Muhammad Saleem Khan Marwat, District Nazim Chitral Haji Maghirat Shah, Major retired G.D.Lingland Principal of and College, Commandant Chitral Scouts Col Suhail Iqbal  and students in a large nubmer participated the farewell function.

Provincial Minister for Population welfare Saleem Khan inaugurated one kilometer black top road to Dulomoos colony and Aga Khan hostel for boys. In this connection a simple but prompt function was also held at boys hostel. Addressing on the occasion Provincial Minister Saleem Khan said that provincial government is trying of its best to serve the public. He express great concern over the ongoing uncertain situation in our province where man killing by hand of mankind and increasing number of suicide bomber has disturbed the whole machinery of our province. He said peaceful environment is the first strain of development and we can never develop without maintain peace in the country. He said PPP leadership facing great challenges but even then they not loose courage and serving their people. He appeal to people of Chitral to maintain their exemplary  peaceful environment for sustainable development of the district. He said mega project are under process which will be launched very soon if the situation remained pleasant. He said a mega project cost 50 million was approved by provincial government for water supply scheme to solve problem of shortage of water.

DCO Chitral Mutasim Billah Shah said that some 22 Doctors are serving in down district who were given admission in Medical college on Chitral quota but they reluctant to serve their own people. He said that I personally sent them letters with a humble request to serve here at least for 5 years but they refused and now I have sent summary to Secretary Health for their immediate posting otherwise stern action would be recommended against them. He said that Professor Abdul Hameed Khan served Chitral,s people for 12 years although he belongs to down district but Doctors of Chitral are not ready to serve here. He said that I have given deadline to SHYDO (Sarhad Hydro Development Organization) to complete work within 25 days otherwise stern action would be taken against them. He said that I also directed Reshun power house staff to repair their water preserver (tanker) in case of their failure they would be posted out. He also warned strictly that deforestation is causing for natural calamity and we should to protect our forest. For this purpose we have dialogue with elites of Arandu to barren illegal cutting of forest otherwise a man would be crushed who involved in forest cutting illegally.

Filed under: Lifestyle, World
Share Tweet Pin G Plus Email
previous article: GET A DEGREE IN SHORT TIME AS WELL AS IN LOWER COST
next article: Obama Orders Pizza Delivery From St. Louis