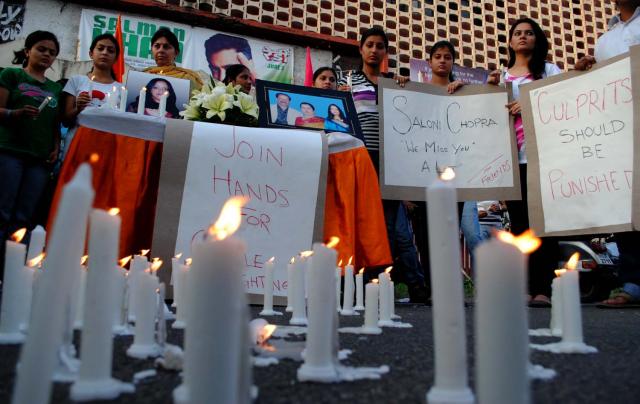 Jammu and Kashmir: In
four years, for the first time friends of slain Saloni Chopra remembered
her by organizing peaceful protest here in Gandhi Nagar vicinity. Friends, relatives
and others, who knew Saloni and her family gathered at Gole Market to lit candles,
observe silence in her memory. Protestors were carrying placards inscribed with
slogans “Punish the culprits”. Photographs of Saloni and her slain parents were
displayed and floral tributes were paid to departed souls.

It
is important to remind that cement tycoon Rajinder Bhushan Chopra, his wife
Madhu Chopra, daughter Saloni Chopra and their two domestic helps were brutally
murdered at their residence in Trikuta Nagar locality, winter capital of , on
the intervening night of September 17 and 18. Police tried its best but could
do more for the past three years. Even, government decided to hand over the
case to Central Bureau of Investigation (CBI) on the request of sons of slain
R. B Chopra but CBI rejected to take up the case.

“For
the past few months police is doing satisfactory job” Puneet Chopra son of R. B
Chopra said and added “I have full faith in police and I am fully satisfied
with procedure and progress being made of police in this case”. Commenting
about today’s silent candle protest by Saloni’s friends, Puneet said that it was
emotional movement for him as her friends and some relatives assembled to
remember and to pay homage to his family members.