Samajwadi Party founded in 1992 under the leadership of Shri Mulayam Singh Yadav. The party is based on the principle of socialism, democracy and equality. Having a bicycle as its symbol is identification of common men in india. Its inception is deep rooted in the backward class political movement of India.

Uttar Pradesh sends a largest number of parliamentarians in the national Parliament.  it is often considered to be one of the most important states with respect to Indian politics.[106] The state contributes 80 seats to total 545 seats of Lok Sabha and 35 seats to total 250 seats of Rajya Sabha.

One of the biggest factors behind the success of Samajwadi Party is its youth leader. These days, I personally observed that they are working very hard day and night in comparison of any party in UP. 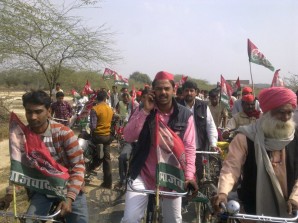 Prashant Yadav, District President of Samajwadi Party- Kshtra Sabha and others in a cycle rally and interacting with villagers in Mainpuri(UP), India

It is witnessed in UP legislative assembly in 2012, a large number of youths have shown their trust and support to this party. The biggest challenge for SP is to retain the trust of youth.

OBCs are a major chunk, constituting roughly 40% in UP election. History reveals their support to Samajwadi Party. The Indian Constitution describes OBC as “socially and educationally backward classes”, As result, OBCs are entitled to 27% reservations in public sector employment and higher education for their social and educational development. Therefore, all Political parties are talking about reservation, education and their socio-economical development.

Muslim Community is an important section of UP, constituting around 18-20% of state population. A major section of this community has been with SP Supremo Mulayam Singh Yadav. A appreciable number of key position in party is held by muslim community. But september’s communal clashes led a significant fall in party popularity and credential in the Western Uttar Pradesh. Many political parties are trying to cash this phenomenon.

As per my observation, Agrarian societies (specifically in eastern UP) are still relying on SP Supremo “Mulayam Singh Yadav”, popularized as “DHARTI PUTRA”. Agrarian society is contributing a large chunk in UP.