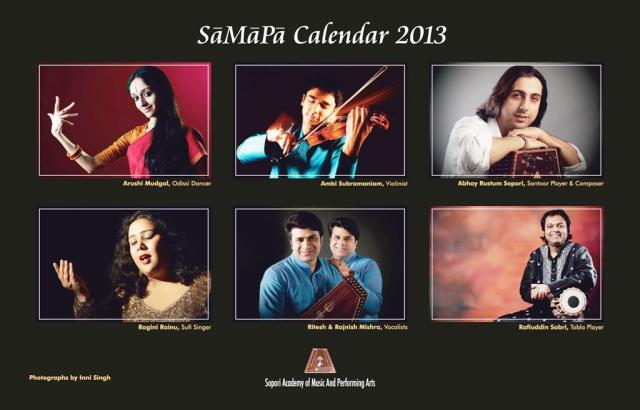 , January 19 (Scoop News) –An event was hosted by Music Legend Pt. Bhajan Sopori to welcome the New Year with release of the first Calendar by SaMaPa – “SaMaPa Calendar 2013” at India Habitat Centre, .

Dr. Suresh Goel, DG ICCR, applauded the efforts of SaMaPa saying that “Music runs generation to generation but keeping the tradition and its essence alive is quite worthy and SaMaPa has just not only put hard efforts to keep Sufi Kashmiri tradition alive but have taken it to new highs at national and international level. Earlier Sohrab Sopori welcomed the guests. He said “SaMaPa is a cultural movement translating from a deep rooted vision of the Chairman, the Music Legend Pandit Bhajan Sopori, and the tireless efforts of the members of Board in creating a unique, unbiased and empowering national level platform for presentation, propagation, and teaching of traditional music and performing arts for the artists and the young talents. SaMaPa widens its horizon into the general masses by creating the right platform for better appreciation and understanding of the traditional music and its technicalities, and enabling them to utilize the power of music in leading a more balanced life, as well as exploring opportunities with music as means to their employment. SaMaPa recognizes the contribution of several artists, leaders, government officials and individual personalities for their tireless efforts in propagating and keeping the traditional system of music alive”. SaMaPa is acclaimed as a of the State of Jammu & Kashmir with rest of the country and to have created a new generation of music connoisseurs. Munish Jolly played a perfect anchor for the evening.