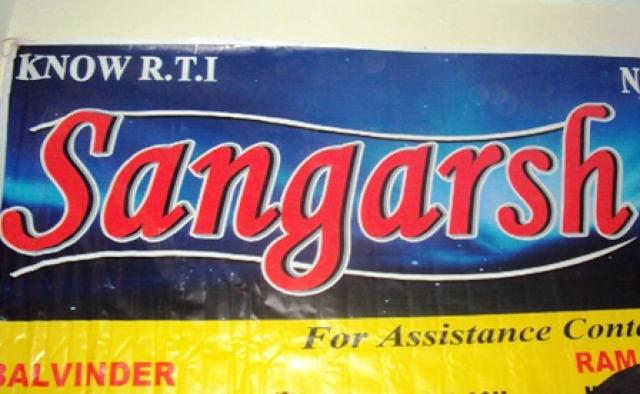 Jammu, October 17 (Scoop News) – Sangarsh RTI Movement in  J & K organized an interaction meet on Right to Information Act at Press Club Jammu, with the theme “ J & K RTI Act: Status and Role of Society and Media”. On this occasion a number of prominent citizens including, lawyers, educationists, members of NGO’s, RTI activists, lawyers, journalists, students and others were present.

. Balvinder Singh, Convener of  Sangar RTI Movement In J and K, while elaborating the main objective of the organization said that it is meant for creating awareness among the masses about the most important civil right i.e. Right to Information Act. He underlined the importance of civil society and media for strengthening the RTI regime in the state.

While addressing the congregation, Sr. Advocate, . S.S Lehar called upon the youth to take a lead in eradicating corruption with the tool of RTI, while . iekh akeel Ahmad, PIL specialist advocate and Kamir High Court described legal aspects of the act and castigated the policies that are weakening the institutions like State Accountability Commission and State Information Commission.

Another speaker . I.D Soni, State commissioner scouts and guides J& K Chapter focused on issue of rising graph of corruption in the state. Majority of the speakers opined and urged upon the government for proper implementation of the RTI Act and demanded the immediate appointment of SIC members, they apprehended that otherwise it will also meet the same fate as that of State Accountability Commission. Others who spoke on the occasion include, Dr. SC Rekhi, Retd. Jt. Director, Agriculture, Dr. RR Khajuria, Founder-Chairman Vichar Kranti Manch International, . PV Rawal, Retd. Security officer, Ministry of Science and Technology, Ex-MLA Ramban, . Bharat Gandhi and . Kamal Krian Lidhoo, Programme Executive, All Radio and Smt. Sarla Kohli, .

Raman arma, RTI activist and co-founder Sangar threw light on the various clauses of the act. While comparing the J & K RTI Act with central act, he pointed out a need to bring the state act at par with centre. He urged the state government to reduce the application fee to Rs. 10 instead of fifty. He also stressed upon the training for the PIOs and implementation of pro active disclosure by the public authorities which is mandatory under the provision of the act.

Ayaz Mughal from Poonch, RTI activist and member Sangar RTIM, focused upon the need of implementation of the act at the rural areas with the argument that the majority of population resides in villages. He also said that the media can play a vital role in propagating the importance of this citizen friendly law for corruption free environment in the state and bridging the gap between the rulers and the ruled.

On this occasion, Sangar RTI activists also filed more than Hundred RTI applications related to various public issues and became the first Organization of the state to set up this record. The argument behind the bulk RTI application is to encourage the aspiring RTI applicants and strengthening the RTI regime in the state.  Sangar RTIM also nominated S. Darvinder Singh, RTI activist from Batote as District Coordinator, Ramban and assigned him the task of creating awareness in the remote areas of his native districts.

Filed under: Media & Tech, World
Share Tweet Pin G Plus Email
previous article: Freedom to Education: World is moving ahead & we keep our children away from schools
next article: Ipad for sale in Wal-Mart: a good idea ?