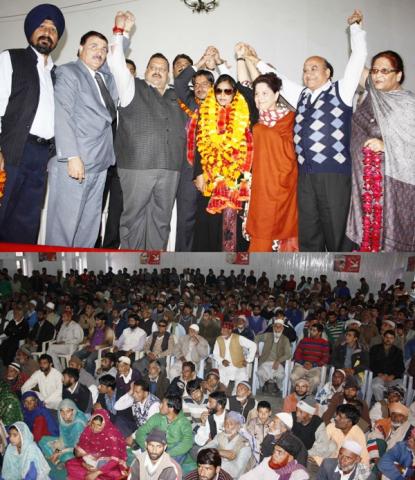 , November 28 (Scoop News) –Peoples Democratic Party (PDP) today received a severe jolt when its entire party set up in Gool-Arnas turned its back to the exploitation politics of the party and joined National Conference at a public meeting here today.

The PDP District President, Dr. Shamshad along with 500 delegates, 106 Sarpanches and Panches, Block Presidents, Youth Presidents, Block Secretaries and other office bearers resigned from the basic membership of PDP, relinquished the party posts and joined National Conference in presence of the Advisors to the Chief Minister, Mubarak Gul and Devender Singh Rana at a function in which hundreds of their supporters participated and shouted slogans in favour of National Conference and its leadership.

Dr. Shamshad and other leaders attributed their joining National Conference to the miserable attitude of PDP towards public concerns adding that the party is only in search of occasions to ignite tension between various sections of the society by exploiting their sentiments on one or the other pretext.

“The party when in power did nothing to ameliorate the lot of people especially living in far-flung and remote areas. Its leadership is only interested in grabbing power for vested interests” they alleged. They said that the lucidity and truthfulness in the politics of National Conference and the dynamism of Chief Minister, Omar Abdullah to seek equitable development, peace and prosperity for the State and its people, have made them to join National Conference and work for the welfare of people of Gool-Arnas area.

“We have shun the party posts and joined National Conference as common workers just to serve the people of our area from the right platform”, Dr. Shamshad said and added that she had joined PDP as a student leader in 2002 but was disappointed to see the double standard of the party with selfish interests for power.

“PDP has done nothing for the people during their tenure in power and totally forget the population living in remote and far-flung areas like Gool-Arnas”, she said adding that the Chief Minister, Omar Abdullah is the ‘hope of youth’ and National Conference believes in practical actions rather than slogan raising.

Welcoming the PDP rank and file of Gool-Arnas areas in National Conference, the Advisors to the Chief Minister said that National Conference is the voice of people. “It has always stood for the people and will continue to represent the aspirations of all the sections of the society”, they added.

Mubarak Gul highlighted the past history of NC and said that the party symbolizes amity, brotherhood and secular traits of the State. He said equitable development and unity between all sections of the society and regions of the State has remained the benchmark of this party.

The Advisor said that NC is a party of common people and its strength lies in the vast and wholehearted support of the people from all areas and all sections of the society. “We are committed to peace and development of the State”, he said listing the measures taken by the successive governments in which NC was a part.

Mubarak Gul also highlighted the historic measures taken by the Omar-led Government during last about 3 years to give fillip to the development programmes and for bringing peace and stability in the State.

Political Advisor to the Chief Minister, Devender Singh Rana in his speech described NC fortress of public aspirations and said that the history of the party speaks loud and clear of the high values nurtured by the party throughout its life.

Rana presented resume of the achievements registered in the State during the last three years of Omar-led Government. He said while attention has been focused to give a forward push to the development programmes, new initiatives in the sectors of skills development, employability of youth, technical education, small scale industrial development, farmers’ welfare, universalization of healthcare facilities and attention towards the upliftment of weaker sections of the society have been initiated.

Criticizing PDP for its double speak and misleading political behaviour, Rana said that when in power this party behaved differently to various issues and when out of power they leave no opportunity to exploit the public sentiments and vitiate situation for power politics. He said that people are witness to the attempts made by this party since it lost power to create law and order problem in the State. “They did not even spare the Azad-led coalition government of which they were a part and sabotaged it from the start”, he added.

Rana welcomed the decision of the PDP workers to join NC describing it a right decision at a right time. “This would help the people of Gool-Arnas in all spheres of development”, he maintained.