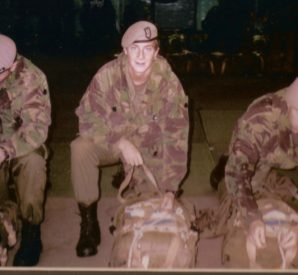 Before Man vs Wild – Bear Grylls served in the British Special Forces – specifically the “Special Air Service” as a commando.

In his best selling book: “Mud, Sweat and Tears” Bear Grylls talked a little bit about his time serving in the British Special Forces. Specifically his time with the SAS (“Special Air Service”).

The SAS, for those who may not know are among some of the most elite special forces unit in the world. There exploits are absolutely legendary.

Almost everything the SAS does is “top secret” today. So it is extremely rare you can get anyone to talk about their service within that unit, especially those who have signed the officials Secrets Act which forbids ex-military from discussing details and operational procedures of the unit. That is why I was so surprised to read such details pertaining to their methods used by the SAS during its arduous training and grueling selection process.

especially those that would otherwise transform a normal individual off the street into a highly trained SAS commando in just under 12 months!

So what is the SAS secret? Its in how they train their personnel:

“Explanation. Demonstration. Imitation, That was the mantra, we would have a drill explained to us, be shown it, then be expected to preform it. Again and again until we got it perfect” (pg 208).

“Just when we were getting the hang of one set of drills, they would throw a whole load more at us. It was a relentless pace, mentally to keep up with, and it is why the SAS are considered to be the ultimate thinking man’s soldiers. That ability to think clearly and act decisively when all about you is chaos. Oh, and to learn ultra-fast. Camouflage, tracking, catching, or CTR’s (“Close Target Recess”). Weapon drills: in the mild, under water, foreign weapons: learning how to assemble and fire them quickly and accurately. Live firing during four man contract drills, while ducking and weaving up jungle target lanes, expending hundreds and hundreds of rounds” (pg 210).

“We’d go from stripping foreign weapons blind folded and against the clock to a ballistics lecture; then into a practical signaling exercise; then from a lake crossing into another pack run: followed by live contact drills, helicopter rehearsals, a field medics lecture and a practical assessment” (pg 213).

“I went on to be trained in demolitions, air and maritime insertions, foreign weapons, jungle survival, trauma medicine , Arabic, signals, high speed and evasive driving, winter warfare, as well as escape and evasion survival from behind enemy lines” (pg 229).