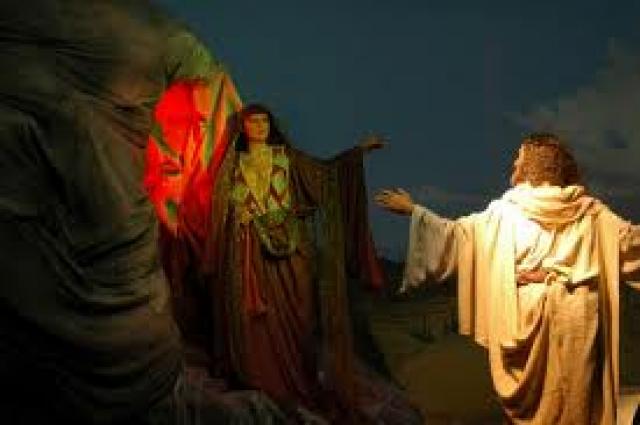 Were Jesus a mere mortal, a mere human being, this would be seen as a tremendous achievement, for no human can possibly survive more than 7 days in the desert under the scorching heat of the sun without food. What we do not consider though, is that Jesus, though in human form, is also God, God in the second person of the Holy Trinity, and, as both writers tell us, Jesus as he wanders off into the desert is filled with the Holy Spirit.

Jesus being God, although in human for, would have no need for food to sustain him physically be it for 40 days or for 40 years. He is God, so the time period of 40 days is irrelevent. Jesus being God, had no need for sustenance by food or water for that matter.

Both writers Matthew and Luke, then go on to relate how Jesus is tempted by Lucifer, Satan, the devil. This is a curious situation. Satan knows God recognizes God. Satan also knows and recognizes Jesus as God, yet Satan tries to tempt God against himself.

Satan’s first thought is to test Jesus hunger as a possible weakness. Satan proves how truly stupid he really is, suggesting to Jesus that if he is truly God’s Son, he could command stone to become bread.

God, even Jesus as the Son of God, had no need for food to sustain himself.

Jesus replies rightly so that "Man does not live by bread alone, but by every word of God."

Satan’s second temptation of Jesus is wealth and power as satan reveals to Jesus all of the various empires and their wealth. He tells Jesus that all of these empires and kingdoms and their wealth were given to Satan, and that He, satan would give them to Jesus, if only Jesus would fall down and worship Satan, turning his back on God.

Here Satan displays his arrogance and his ability to lie and deceive as he tries to tell God, tell Jesus that all of this wealth, all of this power all of these empires have been given to satan and that they are his to give to whom ever he so chooses, when infact they all belong to God and not to satan.

Satan is reminded that God and only God is worthy of worship and that all wealth, all power is but an illusion.

Satan’s third test of Jesus is to dare Jesus to throw himself off the top of the temple of Jerusalem stating to Jesus that if Jesus is whom he claims to be, that by doing this by jumping off God would send down angels to catch jesus, to rescue Jesus from danger.

For the third and last time that we know of, Satan is told that God cannot be and must not be tempted nor tested and Satan is ordered to leave.

Satan illustrates to us in these writings, his true stupidity and errogance, and his ability to lie and deceive as through just these three recorded attempts recorded by both apostles we see Satan trying to turn God against himself. Not a smart move!

It is through these attempts by satan, we can see just how twisted a liar and murderer satan can become trying to trick God, in the form of the second person of the trinity, Jesus to go against himself.

Later in the Gospel of Matthew at MATTHEW: 12: 24-28 we are reminded by matthew of the facts that Jesus is God, the Son of God incarnate, when Jesus addresses the Pharisees, who accuse Jesus of being Be el ze bub, for his casting out of demons.

As we move through the Lenten season, as well as when we move through our daily lives we should be remembering the teachings from these portions of scripture and checking ourselves to make certain that we do not stumble as Satan tried to get Jesus to stumble.