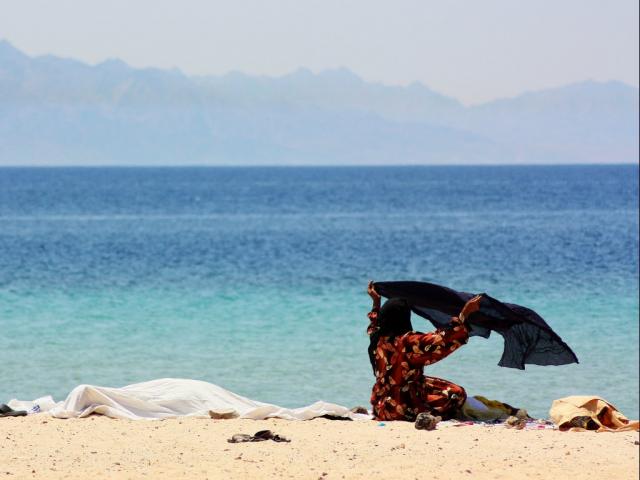 While there are no doubt restrictions for women living in Saudi Arabia, they do not necessarily match the oppressive image that many foreigners have of the country. In this post we have advice for women wanting to visit Jeddah alone, a review of a women-only hotel in Riyadh, and a plea to those foreigners who feel they want to speak on behalf of oppressed Saudi women.

We start with Hala, currently living in the US and blogging atHALA_IN_USA, who is giving advice to a single female friend visiting Jeddah for the first time:

Women in Jeddah are dressed in an outside gown called “Abaya”, it supposed to be worn over clothes so dress lightly beneath it especially in the summer. The scarf however, is not a must for a female visitor in Jeddah but a preferred thing to wear (for safety and convenience) in traditional places.

There are a variety of places to see in Jeddah, I would suggest the Balad, the old city of Jeddah, with its historical architecture and old houses, Naseef house is a good example of one. You can purchase traditional goodies from the old shops and enjoy the aroma of Arabic perfumes like Oud and Bukhour, there’s also the traditional handcrafts like the light bulbs or fanoos [lantern], the dates, the sweets and the textiles with various colors.

Then, there’s the famous Jeddah Corniche. I suggest visiting it early in the morning or at 6pm to see the open air sculptures along the sea side, there’s also Jeddah sea-fountain, one of the highest fountains in the world. There is a variety of food choices along the corniche from fancy eating in restaurants to fast food or even small booths for biscuits and chips. The local people would sit for hours by the sea side with their children playing around and watching the passersby.

For more of Hala’s advice of what to see in Jeddah, see here.

Meanwhile American Bedu, an American living in Saudi Arabia, tells us what she thinks of a women-only hotel in Riyadh:

The Al Luthan hotel and spa is the first women only facility of its kind in Riyadh. It is a luxurious hotel and spa for women only. It is a full service hotel and spa offering deluxe, comfortable and safe accommodations. Al Luthan welcomes both Saudi and non-Saudi females. Now some women have spoken out to the media that the opening of Al Luthan is a step backwards. According to these women, they see it as a backwards movement for the Kingdom due to the fact that there is already so much enforced segregation and women not only have few rights but promoting and endorsing a women’s only hotel and spa further diminishes women from receiving rights. Maybe I am in the minority but I take the opposite view. Al Luthan is not unique when compared to the rest of the world. Women hotels or women-only floors are actually common in most major cities (and some not so major) all over the world. Back in earlier times when I was doing a lot of international travel, I enjoyed staying on a women-only floor, especially when in foreign cities which were not as accustomed to business women traveling alone. So to me, I do not see a women’s only hotel as a step backward at all but another nice option to have for women in the Kingdom.

Riyadh blogger Sweet Anger is fed up of foreigners assuming that Saudi women are oppressed, while knowing nothing about their lives or society:

So I was googling one thing or another when I found a post about the abject horror of a reporter in Saudi who was female and was therefore not permitted to stay in the men’s section of Starbucks, umm boo hoo hoo. Now what grabbed my attention wasn’t the article itself, but the comments. […] Juuuuuust so we’re clear, Saudi is not a bunch of tents stuck together with roaming camels, men in turbans singing “Allah o akbar” raping women cause it’s their right and having a harem of no less then 20. Oh and we don’t circumcise our women, man that’s just nasty and wrong on too many levels. Women are not locked up at home and any who are is a matter of the family culture not the country, still with me? Good. We’re not backwards you morons, we’re conservative, i.e. if you want to go and mingle with the opposite sex you go to a specific place. […] Now my more important point is, since when do you get off judging people: “Close Starbucks!! They shouldn’t support them by opening families sections” – umm, excuse me? I ain’t complaining, and I need my coffee, so seriously man, GET LOST, I didn’t hire anyone to be my speaker.

For those of you who are still convinced we are an oppressed nation and us poor poor woman need to be taught how to fight back and if not well go ahead and fight for us, let me give you a little review of what a regular day in Riyadh is like. Now yesterday I wake up, make my coffee … get dressed put my abaya on (if it’s too horrific to think about this, think of it as a jacket), pick up my little angel, get in my chauffeured car a.k.a. driver included, drop my girl off, and go to work. By 1:30 I’m having lunch from Subway with the girls, then go back to work and leave at 4:30, go home, relax, take a shower, get dressed, wait for the driver to take me to the Chinese place since I invited the girls out. Get there around 9:45 and leave around 12, get home, get online, check my facebook and hotmail, then hit the sack by 2am. OH MY GOD, WHAT HORROR, HOW CAN I LIVE A LIFE SO OPPRESSED, AAAAHHHHHH!!!! […] My point is, some people have no knowledge about what goes on in our life yet they deem it their right to judge and be almighty. We’re different, hell yeah, being different from what you think is right doesn’t make us bad or wrong it makes us us. Deal with it and butt out.