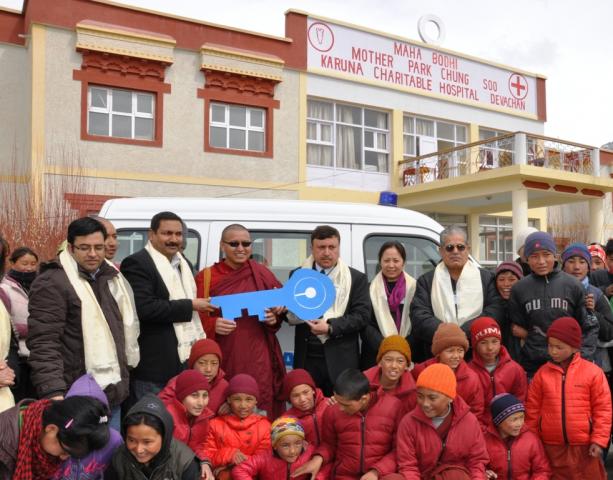 Speaking on the occasion, the Regional Manager, Sh. Ajay Gupta said that State Bank of India has been actively taking part in such social initiatives under the corporate social responsibilities since from its inception and this venture is a part of it whereby State Bank of India is donating such ambulances to organizations working for deprived section of society. He also made a mention about the donation of about 150 Water Purifier to the schools of Leh and Kargil districts under the CSR scheme and other social schemes of SBI.

Expressing appreciation over the selfless services of MIMC in uplifting the underprivileged and downtrodden society of Ladakh since from decades, Ajay Gupta assured to give more assistance to MIMC under CSR scheme in days to come.

Earlier, General Secretary MIMC Ven. Nagasena highlighted the social welfare activities rendered by MIMC under the inspiring leadership of their founder Ven. Sanghasena since from 1991 in the field of education, women empowerment, spirituality, health care etc and expressed gratitude to SBI, Leh for donating an ambulance to MKCH saying that this kind of generous support will go a long way in further improvement of health services through Mahabodi Hospital in years to come.

The vice president, MIMC Padmashree Morup Namgyal also spoke on the occasion and thanked SBI, Leh on behalf of Mahabodi family for donating an ambulance to MKCH.

Filed under: Media & Tech, World
Share Tweet Pin G Plus Email
previous article: Awami Workers Party Demo in 40 cities for land reforms in Pakistan
next article: Is It Possible For A Car To Be Fueled On Coffee Beans?