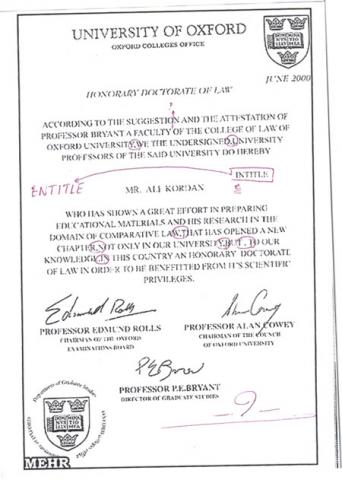 Ali Kordan, Iran’s new Minister of the Interior, has recently been under fire for presenting a “fake” Ph.D. degree from the prestigious Oxford University in the United Kingdom. Several websites, including the conservative Alef have published a scan of Kordan’s “Oxford Honorary Doctorate of Law Degree”.

Alef points out that there are several grammatical errors in the so called Oxford certificate, such as: “to be benefitted from its scientific privileges”. Also, “entitled” was spelled “intitled”.

Alef has also uploaded several faxes that this site exchanged with Oxford University on the issue. The website was then filtered in Iran.

While Iranian authorities are investigating this case, Oxford Universityannounced that they have no record of Mr. Kordan graduating from there.

President Ahmadinejad performed yet another miracle: He selected someone as interior minister who claimed to have a Ph.D. degree in law from The University of Oxford! When questions rose on the authenticity of the degree, the guy outraged, threatened the media and produced this to shut them up. A degree so suspicious that is feared to be faked, with grammar mistakes and with names signing it who are not even members of the Faculty of Law! If Ahmadinejad wants to fake the next election, he’d better employ someone who does it less obviously. What a shame!

Mohmmad Ali Abtahi, former reformist vice president and blogger,writes that when he was the deputy of the Ministry of Culture and Islamic Guidance, he met an Iranian official who had “bought” his Ph.D. According to Abtahi, it seems the price was around US$1000.

According to another blogger, Shirzad [Fa] it seems that Ali Kordan does not even hold an undergraduate degree. The blogger adds:

It means he cheated all these years and got paid as a Ph.D. holder… One of deputies in the Iranian Parliament asked Kordan: “How did you get your Ph.D. in Law, when you say you wrote your thesis in Islamic Education?” “How did you defend it when you cannot speak English. Kordan replied, “I had a translator.”

if the certificates are useless, torn, paper why did Ahmadinejad’s Minister pretend to have one… It is not the first time that Ahmadinejad calls official documents torn papers. Previously he has also called United Nations resolutions against an Iranian nuclear program just useless torn papers.

Ali Akbar Javanfekr, Ahmadinejad’s media adviser, says [Fa] the Ministry of Sciences should take a decision about Kordan’s Ph.D. and suggests it would be better we not to involve personal political opinions on the issue.