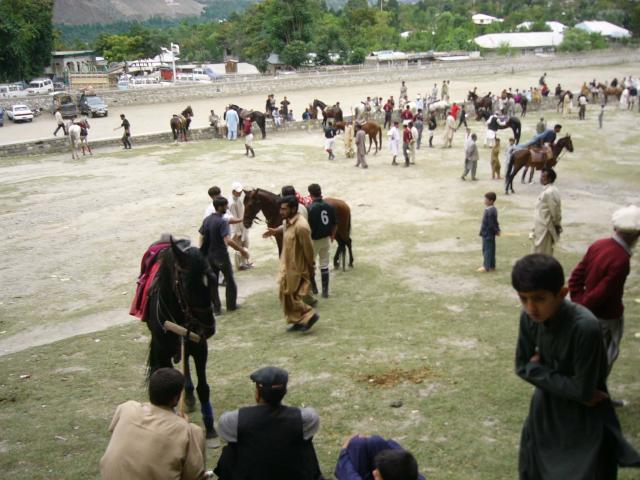 3 Days Shundor Festival likely to be start from today (July 7-9).

CHITRAL: Three days annual Shundor festival is starting from today (July 7) and will be concluded on July 9th. According to District Coordination officer Chitral Mutasim Billah Shah 3 days polo tournament have been scheduled at Shundoor polo ground having the height of 12500 feet from sea level hence the match will be played with a very simple way he added. As per schedule there are two matches on first day of the festival i.e. July 7. The first match would be played between Laspur polo team (Chitral district) versus Ghizar polo team (a district of Northern Areas) the second match on the same day would be played between Chitral D polo team and Northern Areas D polo team.
Two matches would be played on the second day of the match (July 8) among four teams. The first match on second day of the festival would be played between Chitral B polo team versus Northern Areas B polo team the second match on the same day would be contested between Chitral C polo team and Northern Areas C polo team. Hence there is only one match on the final day of the tournament which is very much interesting one. Final match would be played between Chitral A polo team and its traditional rival team of Northern Areas A polo team. The match is playing in tight security to embark any unwanted situation. Thousands of people approaching every year to Shundoor to enthrall from these matches and other colorful programs at day and night time. Cultural show, musical concert and demonstration of paragliding would also be exercised during the festival.
Shunor festival is celebrating every year since 1920 when it was launched by an Military Officer of Royal British Army Col Evelyn Hey Cobb who was a best player and was playing polo match at Shundor to interlink people of Chitral an Gilgit through this match. Col Cob was playing at night time in the light of Moon when it was shining full fledge at fortnight  and Shundor ground was calling Mas Julani ( polo ground of Moon light) In 1935 Col Shahzada Khushwaqtful Mulk (Governor of Mastuj) along with his team played at Shundor ground having the altitude of 12500 from sea level. Former president of Pakistan General Ziaul Haq was the first president who attended Shundor festival as chief guest. Shaheed Mukhtarama Benazir Bhutto also attended Shundor festival twice as chief guest when she was Prime Minister of Pakistan it her first and second tenure.
Former president of Pakistan Farooq Ahmad Khan Laghari also arrived Shundor as chief guest. As well as former president General retired Parvez Mushraf participated as chief guest on the occasion of final match of Shundor festival in 2005 and 2006 who also announced construction of Lawari Rail tunnel and announced other mega projects. Shundor playing a mailing stone role for development of Chitral as every VVIP who attending the festival announce of mega projects at Chitral. This year it will be celebrated with a very simple way due to tense situation in the province and less spectators and tourists expected due to continue closure of road by Curfew.
G.H. Farooqi PO Box No. 50 GPO Chitral Pakistan phone No. 03025989602, 0943-302295,414418.
Email: gulhamad@gmail.com,aghfarooqui@yahoo.com
Filed under: Sports, World
Share Tweet Pin G Plus Email
previous article: Michael Jackson to be buried without brain
next article: Miscreants Damaged WAPDA Tower in Jerma Kohat