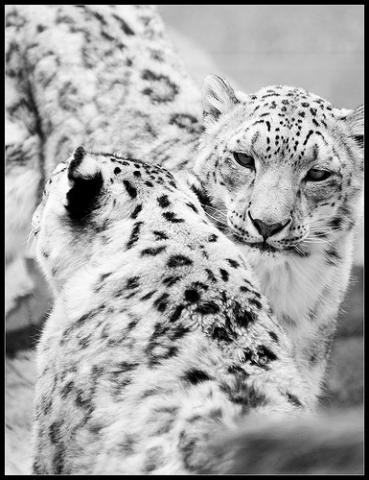 Snow leopards [1] are rare and very elusive. A team of scientists from the Snow Leopard Trust has been conducting a long term study on the big cats and recently followed two female snow leopards, Anu and Lasya, and visited their dens in Mongolia’s South Gobi after they gave birth to their cubs.

Orjan and his colleagues, Sumbee Tomorsukh of Mongolia, Mattia Colombo of Italy, and Dr. Carol Esson of Australia (a licensed veterinarian) report their observations in their blog [2]:

On June 21st, 2012, our field team made a remarkable visit to the den sites of Anu and Lasya. These two females are part of our long-term ecological study and wear GPS tracking collars that help us identify their movements. With this data, we can learn critical information about snow leopard range, habitat and prey needs. This allows us to better understand snow leopards and the threats they face, and make the most of our resources to protect these endangered cats.

In May, Anu and Lasya began to restrict their daily movements to smaller and smaller areas, which the team interpreted as a signal that both were preparing to give birth. Traveling through steep and rocky mountain outcroppings, the team followed VHF signals transmitted by the collars and finally located the dens.

The scientists also uploaded a short video of the two cute cubs to YouTube:youtu.be/ikITxEo7k3Y

They promise to update their observations and answer any audience questions in the comments section:

Thank you all so much for leaving comments, and asking about the mother’s reaction to the smell of humans is very important. After we went to the sites, we have been tracking the mom’s locations via GPS and both have returned to their dens and are actively taking care of their cubs, so no worries there. 🙂