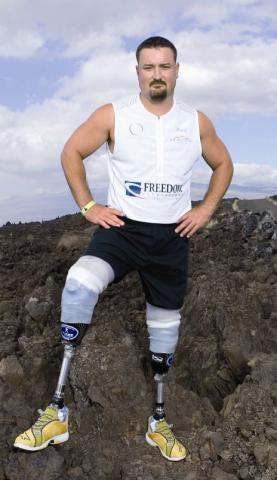 Scott Rigsby is an Ironman Triathlete who completed the 140.6 mile swim, bike and run race for the first time at age 39. He was the first man to complete the race on prosthetics after losing both of his legs in an auto accident.

Scott Rigsby has been nominated for the Energizer Keep Going Hall of Fame contest. Each year, the Energizer battery company selects an series of individuals who show perseverance, positivity and a never-quit spirit. People then vote for the winner online who will receive $10,000 and a $5,000 donation to their favorite charity. Voting is going on now until July 25.

Scott Rigsby’s harrowing experience began when he was fell off of the back of a moving truck and was dragged along the road for more than 300 feet. After 26 surgeries over 10 years, Scott had lost both legs beneath the knee and was depressed. He was inspired by the story of a returning soldier and amputee who is an endurance athlete and decided to train for an Ironman. He completed the Ford Ironman World Championship in Hawaii after two years of training.

To vote for Scott Rigsby in the Energizer Keep Going Hall of Fame, visit http://www.energizerkeepgoinghalloffame.com/KeepGoing/Finalists.aspx