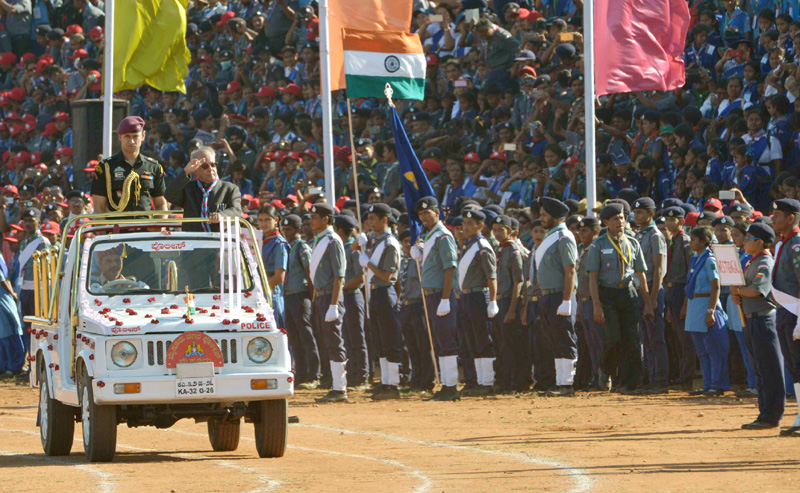 The President, Mr. Pranab Mukherjee at the inauguration of the 17th National Jamboree of the Bharat Scout and Guides, at Mysore on December 29, 2016.

‘Scout And Guides Movement Has Stood The Test Of Time’

Mysore (PIB-GR-TYP-BIN): The President of India, Mr. Pranab Mukherjee inaugurated the 17th National Jamboree of the Bharat Scout and Guides at Mysore on December 29.

Speaking on the occasion, the President said Scouting and Guiding is a tool for enrichment of life skills through proper understanding and awareness of social and national needs. Young Scouts and Guides are valuable members of our society and are active citizens who are contributing to resolving the challenges our communities are facing today. The Scouts and Guide Movement is open to all regardless of race or creed and its purpose is to help young people develop physically, intellectually, socially and spiritually. Scouting is not mere membership of an Organization, but a commitment to uphold truthfulness and dignity in one’s own life at a very young and impressionable age.

The President said the Scouts and Guide Movement has stood the test of time and is relevant to this day even after 109 years of its existence. Today, there are over 50 million Scouts and Guides throughout the world in 216 countries and territories right from the impressionable age of 3 up to 25 years. He appealed to Young Scouts and Guides to dedicate themselves wholeheartedly in the service of their motherland. He called upon them to spread the ideals of the Movement and emulate them in their daily lives.