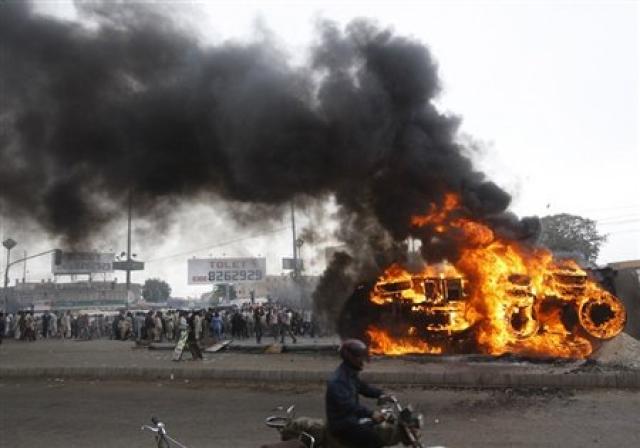 Peshawar: A NATO supply terminal near Peshawar was attacked by some unknown insurgents, causing a large fire and destroying close to 100 trucks and containers.

The assailants came from an unknown location and reached the NATO and US supply terminal near the Hazarkhani area of Peshawar. They were carrying light arms and fired rockets and hand grenades at the terminal, causing the fire. Fire fighters and police reached the area after an hour, and managed to extinguish the fire after three hours, after almost 100 trucks and containers were burned to ashes.

These attacks on the NATO and US supply truck terminals and supply line through Khyber pass and Torkham border have become routine, and every second day there is a similar incident of rocket fire and attacks by the assailants on these trucks carrying the logistics for the coalition forces in Afghanistan.

The experts say that the Taliban and Al-Qaeda insurgents who come across the Pak-Afghan border have changed their strategy and have started targeting the trucks and containers that carry the logistics for the Coalition forces, based in Afghanistan, through Pakistan.