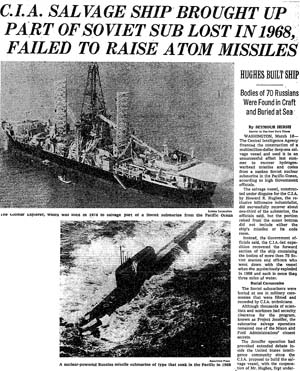 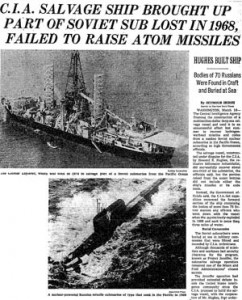 The Central Intelligence Agency (CIA) recently confirmed details of a story regarding the failed attempts to secure three  nuclear weapons lost at sea by Russia in the late 1960’s under mysterious circumstances.

The story began in 1968 when K-129, a Soviet Golf II-class submarine carrying three SS-N-4 nuclear-armed ballistic missiles, sailed from the naval base at Petropavlovsk on Russia’s Kamchatka Peninsula to take up its peacetime patrol station in the Pacific Ocean northeast of Hawaii.

Soon after leaving port, the nuclear armed submarine and its entire crew were lost. The exact cause was unclear.

After the Soviets abandoned their extensive search efforts, the U.S. “located the submarine about 1,500 miles northwest of Hawaii on the ocean floor 16,500 feet below.”

Recognizing the immense value of the intelligence on Soviet strategic capabilities that would be gained if the submarine were recovered, the CIA agreed to lead the recovery effort with support from the Department of Defense. CIA engineers faced a daunting task: lift the huge 1,750-ton, 132-foot-long wrecked submarine intact from an unknown ocean abyss more than three miles below—under “total secrecy.”

“The ship would be called the Glomar Explorer, a commercial deep-sea mining vessel ostensibly built and owned by billionaire Howard Hughes, who provided the plausible cover story that his ship was conducting marine research at extreme ocean depths and mining manganese nodules lying on the sea bottom. The ship would have the requisite stability and power to perform the task at hand.

Constructed over the next four years, the ship included a derrick similar to an oil-drilling rig, a pipe-transfer crane, two tall docking legs, a huge claw-like capture vehicle (known as Clementine), a center docking well (called the “moon pool”) large enough to contain the hoisted sub, and doors to open and close the well’s floor. To preserve the mission’s secrecy, the capture vehicle was built under roof and loaded from underneath the ship from a submerged barge. With these special capabilities, the ship could conduct the entire recovery under water, away from the view of other ships, aircraft, or spy satellites.

In 1970, after careful study, a team of CIA engineers and contractors determined that the only technically feasible approach was to use a large mechanical claw to grasp the hull and heavy-duty winches mounted on a surface ship to lift it.

Sailing from Long Beach, California, the Glomar Explorer arrived over the recovery site on July 4, 1974 and conducted salvage operations for more than a month under total secrecy—despite much of the time being monitored by nearby Soviet ships curious about its mission. During the operation, many small things went wrong but were quickly corrected. However, during the lift when the submarine was a third of the way up, it broke apart, and a section plunged back to the ocean bottom. Crestfallen, the Glomar crew successfully hauled up the portion that remained in the capture vehicle.

Among the contents of the recovered section were the bodies of six Soviet submariners. They were given a formal military burial at sea. In a gesture of good will, Director of Central Intelligence Robert Gates presented a film of the burial ceremony to Russian President Boris Yeltsin in 1992″, according to the CIA blog.

As to the disposition of the three lost nuclear weapons – the CIA press office refused comment.

Note: There are at least “92 incidents” of nuclear weapons being lost at sea, conservatively speaking (I suspect that number is an underestimate, because each nuke carries multiple warheads in many cases).

This particular story is of three lost Soviet era nukes.

The US Department of Defense filed a report stating that between 1965 and 1977 there were 381 nuclear weapon ‘incidents’. These recorded ‘incidents’ are things like nuclear ships and submarines colliding at sea, or nuclear submarines having to be abandoned because they have become unstable. These reports give us an idea of where the nukes may be. The location of other bombs still have to be confirmed.

For example a lost U.S. atomic bomb may also be lying in the frozen sea off the coast of Greenland, according to a published report. Source: http://abcnews.go.com/International/story?id=82897

The most recent ‘incident’ was in August of 2000, when a Russian submarine became unstable. K-141 Kursk was an Oscar-II class nuclear-powered cruise missile submarine of the Russian Navy . In that case the Antey design represented the highest achievement of Soviet nuclear submarine technology. They were the largest attack submarines ever built.

It was built to defeat an entire United States aircraft carrier group. A single Type 65 torpedo carried a large 450 kilograms (990 lb) warhead that is powerful enough to sink an aircraft carrier. The missiles and torpedoes could all be equipped with nuclear warheads. The exact disposition of these weapons are unclear.