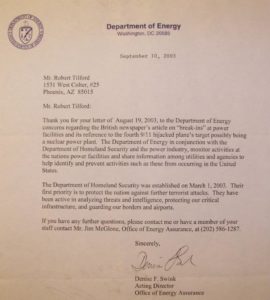 What was the real target of Flight 93 on September 11, 2001? Some speculate it was a nuclear power plant on the East Coast of the United States. Click image for enlargement.

Under a subsection called “Executive communications”  in the Congressional Record on April 28, 2014 was mention of a  a particular letter concerning “Response Strategies for Potential Aircraft Threats.”

According to a source in the United States Senate:

“The document – 2014-06575  (Response Strategies for Potential Aircraft Threats) will be made available for those individuals who have established a “need-to-know” and possess access permission to “Official Use Only” -Security Related Information (OUO-SRI).”

Filed under: News, Terrorism
Share Tweet Pin G Plus Email
previous article: Rep. Jackson Lee sounds off on “racism” in America
next article: Iranian naval commander warns US “firing even a single bullet at Iran will burn the entire world”