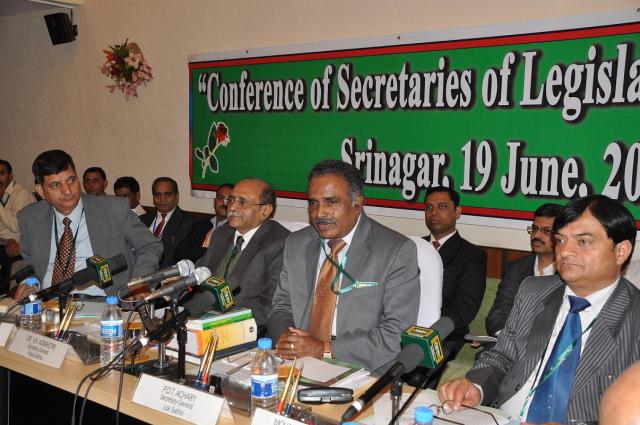 In his welcome address, Secretary Jammu and Kashmir Legislative Assembly,  Mohammad Ramzan said that has a multiparty democratic system of governance with a bi-cameral legislature. The also enjoys the special Status under Article 370 of the constitution of .

He said the State of J&K is accredited with initiating and enacting the significant Big Landed Estates Abolition Act, 1950 proprietary right of the land were transferred to the tillers. The landmark legislation has been widely appreciated throughout the country. The “Ante Defection Law” is yet another landmark achievement, the importance of which stands admitted by the political think tank across the country, he added. The vesting of ownership rights on , known as “Roshni Act” and the amendments in the “Anti-corruption law” by way of attachment of immovable property of the corrupt public persons are other instances in this behalf.

It is 4th time that the conference of the Secretaries of Legislative Bodies of India is being held at . The previous conference were held in 1954, 1970 and 1987.

Terming the event of hosting the conference by the J&K Legislature, as an auspicious and memorable day in the history,  Ramzan hoped that the deliberations at the conference of Secretaries would find out solutions to a number of vital issues related with Rules of Procedure and a live interaction regarding the developmental changes in the Parliamentary practices would be held to derive strength and sustenance.

Ramzan said Secretaries have to play the role of a guardian of the Legislative Secretariats besides being responsible for providing proper  guidance and Secretarial assistance and feed back to the elected members of the House, adding that such conference would help to fully equip legislative Secretaries with administrative competence, dynamism, knowledge of Parliamentary practices and diplomatic skills which are the key charactertics for success in the field. He said, “I am optimistic that we will be able to get enlightened with the enlightened views of our esteemed colleagues of this august body”.

Ramzan said that “the Rules of Procedure and the Conduct of Business of the Parliament and the Legislative Bodies are almost comparable as the problems and obstacles we confront at various occasions in the discharge of our duties are almost identical. Since we all are supposed to take important decisions relying upon our own conscience,  Ramzan added.

Ramzan also presented an over-view of the rich and composite cultural and heritage of the State and said ‘the crown of ’, is bestowed with varied culture and heritage. The State comprises three regions namely, , and Ladakh and every region of the State is blessed with its significant cultural heritage”.

He said the nature has been so generous towards the soil of the State that it has been attracting the tourists from all over the world, right from the ages.

He said though the State of is the only Muslim majority State in the country, yet it has the history of harmony amongst the Muslim, Hindu and Buddhist communities right from the very beginning.