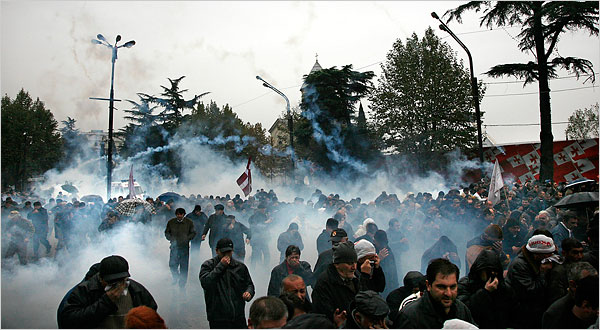 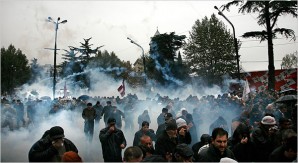 Georgian police let loose with CS tear gas on protesters before they go in an beat the smack out of resisters.

“Secretary Hagel thanked Minister Alasania for Georgia’s contributions to the International Security Assistance Force mission in Afghanistan, and he encouraged Georgia to continue the progress it has made on defense reform and NATO inter-operability.

“The two leaders also discussed the ongoing crisis in Ukraine. They reviewed the efforts by allies and partners in the region to reinforce our international commitments and to continue to apply diplomatic and economic pressure on Moscow.

“Secretary Hagel reaffirmed the importance of the U.S. partnership with Georgia, and pledged to continue our strong defense cooperation” (source: DOD http://www.defense.gov/Releases/Release.aspx?ReleaseID=16695).

Although the new government inherited a troubling human rights problems, including little judicial independence and misuse of administrative (misdemeanor) charges persist of unlawful detainment of activists for minor infractions without having to follow full due process.

In addition investigations into torture and ill-treatment in custody are slow and lacked transparency in Georgia.

Investigations into past abuses raised some concerns regarding selective justice and politically motivated prosecutions. Police did not adequately respond to several violent incidents against religious minorities and lesbian, gay, bisexual, and transgender (LGBT) people.